I’m berating myself but I’ve not been writing much recently; a kind of lethargic sludge has accompanied my every move. I blame the heat.

The summer in the south of Spain, slower to emerge than in previous years by all accounts, has now appeared with sweltering intent. I can just about get through the days but it’s at night when things get most unpleasant. This villa has no air conditioning and the temperature isn’t dropping much beneath 25 degrees. Should I be lucky enough to get to sleep, it’s very rare that it’ll be unbroken. The noises of nature at night are both eerie and exciting. 4 AM is always interesting out in the sticks.

News rumbles through from the UK that the heatwave there shows no sign of abating. I’m coming home in a few weeks to cover a couple of festivals and I’m sure that the rain Gods are waiting for that to make a reappearance.

Amidst the heat and the lethargy, I have been having fun as well. This has been a pretty special World Cup so far. I feel very lucky that I’ve been able to watch pretty much every game I’ve wanted to with beer or wine in hand. I’ve enjoyed/endured much of it alone in this villa but have ventured out once or twice. I found sports bars in Alicante that I liked when I lived there back in April and they’ve really come alive during this competition. 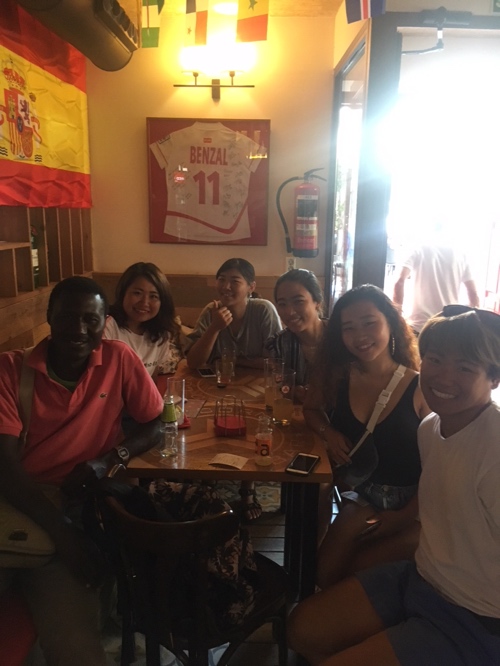 Take Saturday afternoon as an example; an hour before kick off in the Red Corner, there was a mass of yellow shirted Swedes sat around most of the tables. The English were outnumbered but it was of no consequence because there was little of the hysterical nationalism that often rears its head back home. Everyone was up for a party, keen to cheer on their countries but happy to shake hands with the opposition. The Swedish masked their disappointment at the end of the game well and were magnanimous in defeat. It was the same when Japan played Senegal in the group stages. Countries coming together to watch football – it’s what it’s all about yeah?

I’ve discovered a love for swimming in the sea. I had no idea how liberating it can be. The San Juan fiesta in Alicante was a colourful pageant; a crazy mix of bonfires, giant wooden structures, excitement and water. Somewhat drunken, I had no sense of the potential danger I was putting myself in when I nipped out into the sea to bounce over the waves at midnight. I lay on my back and looked out to the moon, not quite full but shining brightly. Some youngsters had bought guitars to the beach and I could just pick out their strummings as I lay there, head half submerged in the salty sea. ‘This is an experience to bottle’, I thought to myself, learning to live in the moment.

Since that revelation in Alicante, I’ve swam in the sea as much as I can. I’ve found a beach near here that you get to by walking along a boardwalk. The smell of the pine and the gentle breeze from the sea air heightens the sense of anticipation as you approach. I spend no more than a couple of hours there. I’ve got little interest in bronzing my white torso. It’s just the saltwater that I’m addicted to.

Last weekend I went on something of a road trip. From the moment that I saw the line-up of Vida festival, I earmarked it as one not to miss. Any festival that can find space in its schedule for Of Montreal, They Might Be Giants, Franz Ferdinand, St Vincent and Calexico deserves credit. In addition to the stellar line-up, I was drawn to the ’boutique’ nature of Vida. Primavera, Sonar, Benicassim and Mad Cool all subscribe to the ‘big is beautiful’ motto whereas Vida is happy to cap numbers. It achieves on pretty much every level. This is a man who has been to a lot of festivals over the last years and very few have left me feeling as satisfied as Vida.

The location helps. La Masia d’en Cabanyes is a neo-classical house on the edge of Vilanova. Beautifully treed, exquisitely lit, you can’t help but feel pretty privileged when walking around these grounds. Small stages appear in hidden woodland alcoves; food vans emerge from behind lines of trees. Vines line the fields and our vista towards the mountains in the distance. This is a great place to watch the sun go down.

I bought myself a wild side ticket. The website promised free beer, wine and cava tasting and that was too much for this Brit to resist. It was worth every penny. On arrival, I was directed to a separate entrance and led into a walled garden by the side of the house. Beautiful people sat on straw bales drinking cava and wine out of glass. I couldn’t help but think what carnage there might be if ‘free’ alcohol was on offer at a British festival. But this was Catalonia, a place where restraint and pacing yourself comes naturally; where binge drinking plays little or no part in proceedings.

I’ll return to Vida in future blog posts. I’ve deliberately not written about the daytime activities that took place at the beach club; astonishing live music whilst drinking Aperol Spritz and looking out across Vilanova’s impressive bay. Suffice to say, I’ve already bought a Wild Side ticket for next year’s Vida. I’ve also bought a ‘Rat Pack’ ticket for a new event that’s being launched in December. Secret Vida looks like it’ll hold equal amounts of joy.

On my first night in Vilanova, I took off all of my clothes and ran out to the sea to skinny-dip (undoubtedly a misnomer in my case with fat-dipping being a better description).

This was all about throwing caution to the wind and losing inhibition. In lots of ways that’s what the last months have been about; stripping away the complex layers and allowing the naked feelings to surface. Long may that continue in this fascinating country.