I feel robbed by the imposter. JP Harris has surely given a sort of shout-out to me from the stage of Bedford’s Ent Shed and  somebody else, a nemesis in a front row seat, has just claimed the glory.

“We’ve got somebody who’s travelled all the way from Spain tonight to see us”, he offers, mirroring some text we’d previously exchanged. “It’s a great country – we’ll get there next year”, he might say in his Southern drawl but I’m distracted, already reeling from the blow.

JP now thinks that I’m that distinctly uncool person sitting to his right, the one waving at him like a deranged, drunken harlot. She clearly doesn’t  know the words to his tunes like I do; she’s not getting his references to great Country songwriters of the dim and distant past; FFS, I bet she’s never even been to Spain for longer than that week in Benidorm.

My anger isn’t healthy. There’s little that can be done. I temporarily toy with the idea of standing up and arguing the toss but “No, I’m your Spanish fan”, seems like a foolish intervention. I anonymously slink into my chair and resolve to get on with enjoying the gig.

And enjoying yourself at a JP Harris gig is an easy pastime. This is a songwriter who’s at a pinnacle of sorts. His latest album, Sometimes Dogs Bark At Nothing, sees the slightest of diversions from the out and out country that’s made his previous records so great. But the variety, the veering into blues, soft-rock and folk, simply makes this two hours in his (and his astonishingly talented bands) company more palatable. And ultimately it does still feel like we’re being transported to a backstreet bar in Nashville.

The Ent Shed is a new venue for Sonic Breakfast; it’s an impressive community hall, an extended skittles alley in the backwaters of Bedford. Attached to the Gordon Arms pub, it’s a place to love, cherish and value. Capping capacity at 100 people, it seems to be building a fine reputation in promoting these sorts of gigs. The plethora of punters in cowboy shirts and wrangler jeans have clearly clocked on that if they want their fix of slightly under-the-radar Nashville quality this is the place to be.

The sound could be better. JP’s songs come alive with the lyrics, sometimes poignant, often sad but mostly true stories about past misdemeanours and struggles. Happier tales do surface from time to time. If only his vocal was slightly elevated within the mix we could engage more. As it is, we marvel at the playing and at the tunes without quite getting the full blow by blow account.

His banter is engaging between songs. Hirsute with the best of beards, authoritative and tattooed to the hilt, you’re inclined to accept his murmured wisdom without question. He talks genuinely about the extreme hassle that women face in the music industry before launching into set highlight, ‘Lady In The Spotlight’. A curious explorer,wanderer and reveller, he talks of leaving home when young and the impact it had on his Mum. Crazy tours of the past, lost love, mistakes, regrets, solitude and his battles with alcohol also come to the fore. ‘When I Quit Drinking’ and ‘I Only Drink Alone’ being gut-wrenching statements of his stark honesty.

I’d hate to give the impression that this is all navel-gazing therapy though; for the most part it’s a rollicking ride, a bar-room blitz, a storming hoot. The pedal steel merges with the guitars and drums to create a pretty party on this Saturday night.

Miss Tess supports. Part of JP’s band, her set is a gentle prelude to the main event. Clearly a Nashville name, she duets acoustically with Thomas Bryan Eaton (also JP’s pedal steelist) giving a showcase of her cabaret-country tunes. Like JP, she’s also an entertaining raconteur moaning that her professional touring life gets in the way of her love life. She glows when telling all that a marriage proposal came her way earlier on this tour in Scotland and delights in disappointing Bedford’s Tourist Information Office by questioning the greatness of the castle. I didn’t know Bedford had a castle. I won’t now go. Essentially though, the songs stand up to scrutiny and I resolve to check out more when I get back to Spain.

Like all here, I’ve loved my night out in Bedford. I’ll head back to Spain happy. As the gig draws to a close I think about waiting around to put right the wrong and to claim my prize. I realise such behaviour would simply be churlish and head out to the car with a spring in my socks.

I’m glad to see that Wovoka Gentle are slowly and gradually expanding their fan-base. One of the many perks of going to lots of summer festivals is that you ‘discover’ live acts that you quickly grow to love. You get home, clean out the mud from your tent and reflect on what you’ve seen. 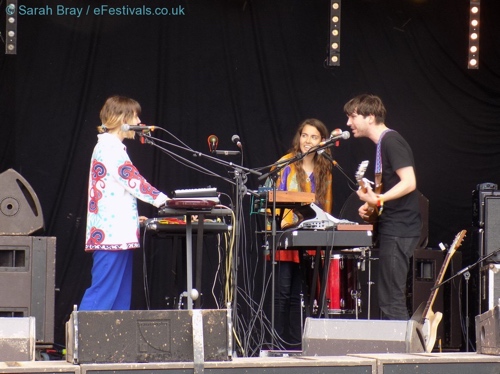 Here’s an extract from my eFestivals review of Nozstock back in 2017 (full review here)..

“Earlier in the day, I’ve accidentally stumbled across a new favourite band here though. Think of a folkier version of Caribou and you’d be in the right space for imagining Wovoka Gentle. A three piece, they all convene around an array of instruments in the centre of the stage. With electronic bleeps merging in with more traditional ‘folk’ instruments and their own sampled and looped voices, they produce a blissed-out psychedelia perfect for a Sunday afternoon. There are criminally few here to watch, perhaps because Wovoka Gentle are a name not widely known but I’d recommend checking them out with haste. I curse myself when wondering about what other delights I might have missed around Nozstock – though you can’t be everywhere.”

Given the new favourite band status, I’ve been disappointingly tardy in writing about them on Sonic Breakfast. A whole year has passed since Nozstock.

A few weeks ago, a lovely PR agency informed me about a new Wovoka Gentle release. This song, 1,000 Opera Singers Working In Starbucks, was right up Sonic Breakfast’s street. It even had a sparkling video with mad animations. I listened, watched and loved. Diligently I added their name to my makeshift list of bands I really must feature. And didn’t.

Last Friday news arrived of another new Wovoka Gentle tune, Peculiar Form Of Sleep. I was on my way to Benidorm for Visorfest and, in theory, I’d have time to piece some words together whilst sitting on the tram between Alicante and Benidorm. Instead, I watched as we hugged the coastline, passing pretty coves and stretches of beach less populated than the towns book-ending the tram ride.

Wovoka Gentle played London’s ICA a few nights ago. I wish I’d been there. As I’d witnessed back a-while, this trio of clever conjurers magically play with time signatures, traditional rhythms and folk melody to give the most compelling of shows. One wonders if they’re actually as laidback as they appear or if offstage they’re more highly strung. It feels right to write about Wovoka Gentle whenever the mood takes because that’s the ethic they seem to promote. Like a British version of Animal Collective, it’s fascinating to see how this tribe will develop.

I might write about them again and it mightn’t take a year. They remain a favourite band.

The pre-teenage Sean wasn’t half a geek. I’d progressed from collecting football stickers but held court in the playground when it came to discussing all things ZX Spectrum. Others, arguably from more ‘middle class’ homes, swore by the virtues of the BBC computer (and some were swayed by the Commodore) but I was loyal to my Sinclair. I once had a program I wrote in ‘basic’ for my ZX81 published in ZX Computing and was paid the princely sum of £5 for it. Raspberry Pi – eat your heart out.

I can recall my first evening playing Manic Miner like it was yesterday. I’d only recently advanced to the ZX Spectrum and it was all set up around the family TV in an act perhaps akin to watching the coronation a generation earlier. That little black box with rubbery keys, the standalone Ferguson cassette recorder beside it a vital component in loading the games.

Manic Miner lurched out from the screen; a blitz of colour and sound that I’d never witnessed before from older TV consoles, Binatone bat and ball configurations. Collecting keys and avoiding comic monsters whilst pixels of ground vanished beneath your feet. I’m sure that I fell asleep that night to dream of toilet-seat creatures and crushing boots. It’s perhaps explains my love of all things psychedelic now.

And then came Jet Set Willy. A wonderful sprawling mass of a game. Frustrating and seemingly impossible to complete as you wandered around Willy’s mansion collecting objects. We’d use up our school lunch breaks thinking up how we might jump further to reach those objects just out of grasp. And report back the following day. We’d be at the newsagent on the day that Crash magazine came out using up our pittance of pocket money to devour the tips and gossip from the Spectrum world.

Even back then, Matthew Smith, writer/programmer of Manic Miner and Jet Set Willy, was something of a hero. The magazines fed the myth; a bedroom programmer who we could all aspire to be in a few years time. We waited anxiously for news of other games from this genius, snippets that we could cling to in order to convince others (and ourselves) that the influence of the Spectrum was not waning. It never came.

Yesterday, I received details of the song, ‘Where Is Matthew Smith?’, by the British IBM. Immediately I knew what this was going to be about. I had little need to read the attached press release.

It’s brilliant – and the accompanying video is shot in my home town (just to clarify that’s Leicester and not Catral, the place in Spain where I currently reside). I think that the fact that Leicester houses the Retro Computer Museum was vaguely etched in my head but it’s not a place I’ve ever visited. Slightly out of town, it’s just open on Sundays and run by volunteers. The British IBM got special dispensation to film the video for ‘Where Is Matthew Smith?’ at the museum. The images take you back and I’m resolved to visit when I’m next in England.

As for the tune – ninety seconds of power pop punk, expertly dispatched by geeks like me. Their ‘Jet Set Willy’ tune brings back so many memories as well. This afternoon I’m going to load up a Spectrum emulator on this pad and reminisce whilst playing the British IBM on repeat.