You’re going to struggle if you head to an indie gig to find originality. The genre is chucking out little new and the young lads that are involved wear their influences very firmly on their sleeves. This is no bad thing; you just have to roll with it, right? Enjoy it for what it is and suspend the extremes of your critical faculty for a while.

This is certainly true of Tuesday night at the Old Blur Last (see what I deliberately did there?). Tonight (Matthew), we have three more than competent acts from across the UK who have all scoured through their parent’s CD collections to collate their chords of influence. They’re all, in different ways, likeable and it all makes for an entertaining though hardly ground-breaking evening.

Jack Perrett is the headliner and arguably the pick of the bunch. Jack and his two mates, from Newport South Wales, are very much from the indie-mod camp, oozing with Jam and early Beatles influence. It’s all ‘lazy days’ and ‘sunshine mornings’ carried along with a generous dose of harmony and melody. Jack shows that he’s got an ear for writing a catchy, radio-friendly singalong and more than demonstrates how appreciative he is to have a crowd to play in front of. Some guy in an Arsenal shirt bounds up onto stage and stays there for four songs taking pictures on his i-phone. He’s the merch guy but it’s not entirely clear why he thinks it appropriate to hog Jack’s limelight. Jack and the others are too polite to tell him to fuck off. The kids of today eh?

The Orders have travelled from the Isle Of Wight for this show. They wear shorts because that’s what everyone does on the island. Another three piece, you can tell that they’ve practiced hard in their bedrooms. The floppy-haired guitarist who also takes lead vocal duties can certainly play his instrument; many of the songs descend into psychedelic wig-outs with extended solos when we perhaps want short and snappy. It’s Britpop with occasional swerves towards grunge. Sometimes you can’t entirely make out what the singer is saying between tunes; he needs to project, show a bit more confidence with the mic yet I’d still see them again.

Pastel are playing when I arrive. From the way they look to the sound they make, these guys from Swansea via Manchester nail their indie credentials to the mast. Think shoegaze and The Stone Roses with an Oasis sneer and you’ll have pinpointed Pastel. But, to their credit, they don’t come across as cocks on stage; there!s a sort of contained confidence, a shuffling laid-backness that’s actually quite charming. Admirable.

I’m glad I made the effort to get on the 205 and head to the Old Blue Last tonight. All three bands have entertained and it’ll be interesting to follow their progress from here.

It takes something pretty special to get me dancing like a crazed maniac on a Monday night. In fact, I’m hardly known for my weekend strutting and so the sight of me bopping like a bad one early in the working week would have filled the casual bystander of a friend with all sorts of confusion. Fortunately, for me at least, I’m pretty sure that there is no video evidence of my flailing and failing extremities. And besides, it would have looked odder not to be dancing at the Finsbury to the French funk of Old School Funky Family. The whole room was up and at it. It was contagious. 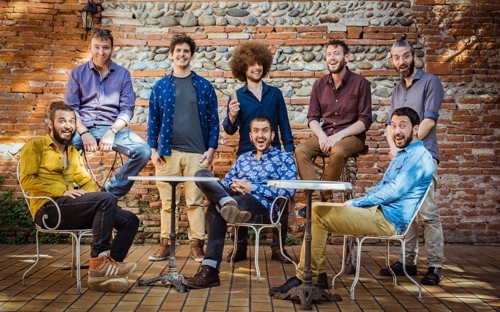 Old School Funky Family are on a short UK tour. You can see that they’ll go down exceptionally well at festivals and it should be of no surprise that the good people of Chai Wallahs have snapped them up for Green Man last weekend and Shambala this. In between, they’re playing shows across the country. Go and see them if you’re going to Shambala or living in Bristol. They will not disappoint.

In any other town, you’d pay good money to see musicianship of this quality. London continues to confound and delight in equal measure. I realise there’s a ton of competition out there every night but quite how this can be put on as a free show is anybody’s guess. “You’d be happy paying £15 for that”, says a punter, slightly gobsmacked by what he’s just witnessed. And he’s quite right as well.

There’s eight of them crammed onto the Finsbury stage. Brass heavy and brass led, it’s instrumental funk with more than a sprinkling of jazz. They’re from deep in the South of France – and it’s perhaps appropriate, given the nationality, that bass duties are not taken by a guitar but by a French horn. Between each song, one of the troupe takes a microphone and introduces what’s coming next.

At different times in the set, each member of the band gets to delight with an extended solo, to show off their musical pedigree with a spotlight slot. Other members of the band give way sometimes leaving the stage to signal what’s about to occur. In the hands of lesser musicians, such interludes might become little more than elongated wank-fests. But these guys are so talented that it’s always astonishing to watch. The clarinet player particularly impresses in his solo. It begins all seedy, backstreet nightclub (slow and languid) and ends with fireworks (explosive and illuminating).

Whilst the core of this is jazz-funk, Old School Funky Family can also mix it up. They play a cover but mostly it’s their original compositions. They draw on their proximity to North Africa to charm snakes in one piece and take us on a tour of EDM styles in another. My short attention span never once wanes whilst my legs move; the dynamics on stage providing just enough to maintain interest.

Support act for the night, Mulvey’s Medicine, could learn from this. Indeed, I’m sure they are for many of their seven-strong number are lapping Old School Funky Family up dancing in the front row. Mulvey’s Medicine also indulge in instrumental jazz-funk and do so with fine musicianship. To move on to the next level, I’d politely suggest that they now need to give some thought to their stagecraft. They jam well – and it’s by no means boring to watch – but what might their gimmick be that can set them apart?

The night (and probably the week) belongs to Old School Funky Family. This was no typical Monday.

What better way to enjoy a Friday night in London than to spend it with revered Scottish ‘miserabilists’, Aidan Moffat and RM Hubbert? It’s their last ever London show and you’d forgive a few tears yet the reality is that both are pretty chipper and this is an upbeat affair. As upbeat as downbeat can get anyway. 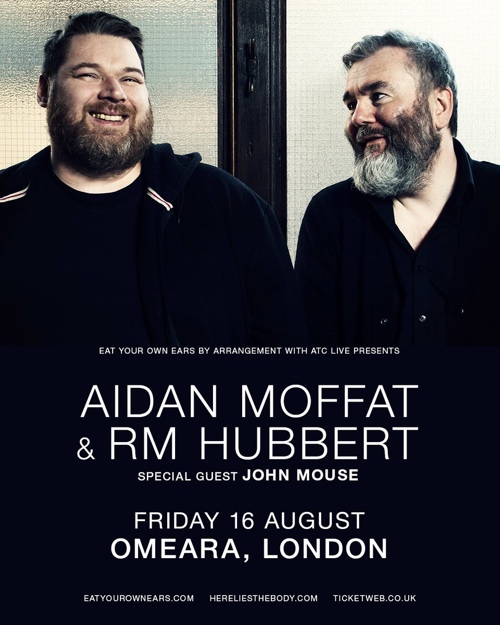 Hubby sits throughout, sometimes singing,  but mostly adding crisp flamenco rolls over which Aidan offers his trademark Scottish scrawl. Spoken word poetry interspersed with moments of sheer beauty when things resembling choruses kick in. Siobhan Wilson sits behind the pair adding vocal and violin depth. “This is another song about shagging the wrong person”, says Aidan, giving the crowd exactly what they want.

It’s the humour, the banter and the camaraderie that gets Hubby and Aidan through the night. They’re mates from that hidden bar snug you’ve always wanted to discover, jibing with each other to mask their obvious mutual respects. Accidentally and with no ill intent, Hubby comments that the tea-towels at the merch desk might be of more use as a Christmas present for women and Aidan, after revelling in the rightful response such gender stereotyping produces, helps his friend out by being even more of a cunt. “My girlfriend fucking hates me”, he observes before playing “another tune about the breakdown of the family unit.”

“Brexit’s going well”, says Aidan in trademark sarcastic manner before Hubby follows up with “you’re all welcome to visit us when we’ve independence”. Hubby’s only a tad pissed off that his name isn’t there with Aidan’s above the entrance to the Omeara. “I’m not even going to get fucking paid for this show”, he jokes whilst Aidan looks on amused.

“How come you don’t sing our songs back at us?“, shouts Aidan when the beardy and bespectacled crowd (that’s just the women) sing along to the stripped-back reading of Yazoo’s ‘Only You’. The sad longing of the tune comes to the fore under Aidan’s baritone – but let’s face it, he has the ability to make the happiest of texts seem mournful. In the running joke of the night, the crowd try to force a cover of Wonderwall out of the pair but they’re having none of it. We do get a Napalm Death cover, “You Suffer”, though. It’s brief but still a 12 inch remix on the original.

Welshman, John Mouse, is an entirely appropriate support act for the evening. Those gathered probably know that he’s not the reggae ‘John Mouse’ or the mis-spelt ‘John Maus’ yet John still sees fit to explain. At times he plays a Fender strat; at other times, it’s just John and a backing tape. His largely spoken-word story tales are dark and appear to be about childhood memories of injury or death yet the bright, bossa-nova beats and incongruous dance moves mask the subject matter. I’m reminded that one of his tunes – all about breakdancing to electric boogaloo and other memories of being a youngster in the 1980’s has been recommended to me by Spotify before. I resolve to check out more after being taken aback by his tune about the man down the road who’s bothering him.

The end is nigh for Aidan Moffat and RM Hubbert. They finish with Car Song, the first tune they ever wrote together. And it sounds as beautiful tonight as it ever has. I’m willing to bet that nobody in the crowd wants this to be over and such is the response I wouldn’t be surprised if Aidan and Hubby aren’t having second thoughts themselves.