Dean Jackson is a fine man. For years now, he’s been a man to influence if you’re an act from the East Midlands. Dean is the presenter of The Beat, a show that goes out across the BBC local radio network in Leicestershire, Derbyshire, Nottinghamshire and Lincolnshire. Between 8 and 10 every Saturday evening, Dean and his team feature the very best unsigned music in the region via BBC Introducing.

Kevin Hewick is a fine man. For years now, he has been an influential and yet largely unrecognised talent on the local Leicester music scene. Spend five minutes in Kevin’s company and he’ll entertain you with one of his many rock n’roll tales. Kevin was once signed to Factory records. He was very nearly the man to replace Ian Curtis as lead vocalist in Joy Division. I reviewed one of Kevin’s recent Leicester shows here. 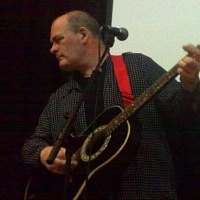 Tonight, at the BBC radio studios in Leicester, Dean Jackson briefed a gaggle of interested Leicester musicians on the processes behind BBC Introducing. In an informative session, Dean and his team told all those present how they could maximise their chances of getting airplay. If you’ve got a song with a short intro that lasts no more than four minutes and if you can convey emotion whilst singing in tune you could well be onto a winner. Clearly, there’s more to it than that and there are always exceptions.

On Kevin Hewick’s latest album, the excellent ‘Heat Of Molten Diamonds’, there are tracks that are 13 minutes in length. Kevin was listening to Dean tonight. He asked some questions and made some comments when given the opportunity to do so. Kevin’s point (I think) was that some of the rules laid down by BBC Introducing (there are always exceptions) make it harder now than it ever was to get an audience for your recordings. This wasn’t the way it was for Can. Kevin then told all how Lauren Laverne told him to ‘bog off‘ on Twitter when he complained about her playing ‘that Daft Punk tune about Giorgio Moroder that’s 9 minutes in length.’

Despite some of these differences in opinion, you could tell that both men have a healthy respect for each other. I wish I’d written the phrase down but Kevin said something like, ‘You’re a good man within an evil empire‘ about Dean. And you got a sense that, if BBC rules allowed, Dean would love to play Kevin’s 13 minute opus on a Saturday evening. It’s certainly true that both are good for the East Midlands music scene.

Here’s a track from Kevin’s latest album. If you’ve not got a copy, it can be purchased from his website. It’s worth adding to your collection.

And here’s the excellent video of the same tune.

One thought on “Dean Jackson and Kevin Hewick”