Stop That Train are a band that I’ve seen develop over a couple of years. Indeed, when I first saw them they were called ‘Blue Sky Goodbye’. A trio, they indulge in a ska pop thing that this city has done so well over the years. Rumours abound that the excellent ‘By The Rivers’ are going to be headlining a stage at Glastonbury this year. Stop That Train are made in a similar mould. 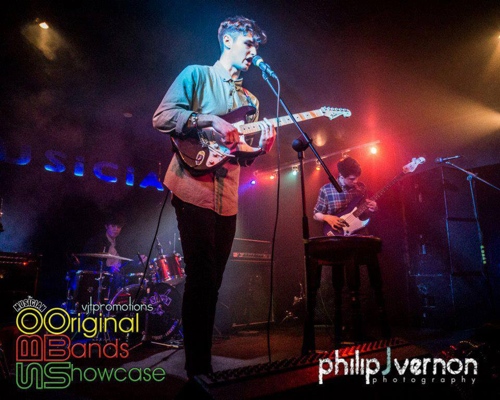 When I first saw Stop That Train, it was clear that they had the tunes and musical prowess. It wasn’t clear if they had the stage presence. Lead singer, Geno, has a charm but sometimes, in the past, he’s struggled to project this across a crowded room. Instead, we’ve got an awkward intensity that could be broken with a smile and a wink.

This shuffling concentration was less evident last night. Geno is coming into his own on the stage. The rhythm section,Harry and Josh, support with impressive swagger. It was obvious that this band of friends were having fun last night and such spirit captivates.

With album ‘Turn Left On Brazil Street’ recently released and a growing base of fans, I suspect that the future is a bright one for Stop That Train. Nobody wants to get off quite yet. This stock keeps rolling.