I’m running out of days to preview the great acts that are going to be playing Liverpool Sound City this year (the brilliant Kagoule are getting Radio One airplay this week so their stock is rising) – but it’d be wrong to get on my train tomorrow from Leicester having not mentioned THE Leicester based band that are on the bill.

I have to make a terrible confession. Although Clubs have been making considerable noise around these parts, I’ve yet to catch one of their live shows. Friends who have touched upon their considerable power tell me that I’m a fool for doing so. 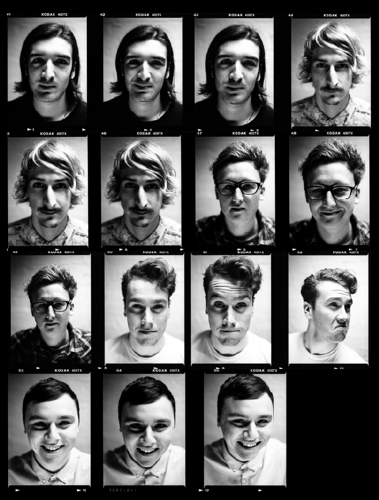 Subscribing to the google game of awkward searches discussed when I profiled Movie, I’m aware of previous incarnations of Clubs. I understand the sound is different now with an increased pop sensibility replacing the more angular guitars of Panda Youth but even a casual gig goer could have seen that in lead singer, CJ Pandit, here’s a band that would turn heads.

They seem to delight in projecting a mysterious presence. Other acts listed to play this weekend provide complicated press releases detailing what their Grandparents like for breakfast (mostly porridge) whereas Clubs simply say ‘Progressive: Patience Is A Virtue.’ And their Soundcloud account isn’t cluttered with remixes or tracks released 5 years ago that give no indication of what we’re about to see. Instead, we just get this one track, Bleed. ‘Heavy pop’, they describe it as and they’re not wrong. It’s a fine tune with which to beckon in these longer daylight hours. It pop peppered with pollen. Full of muggy, fuzzy warmth, it could provide us with this Summer’s soundtrack… And there’s more to come.

Clubs play ‘Sound Food And Drink’ at half past 6 on Saturday evening. If this is your first opportunity to see them, take it.