A week ago on Sonic Breakfast, I posted about a wonderful Japanese ex-pat band called The Watanabes. And I pondered whether the ex-pat scene in Japan was an active one. The Watanabes are clearly generous, sharing sorts for Duncan from the band sent me a couple of other recommendations to check out.

One of those recommendations was Jimmy Binks And The Shakehorns. He must have known that left-field Alt-country, the sort of songs that The Broken Family Band used to issue before their sad demise, presses one of my many buttons. There’s lots of fine stuff here. 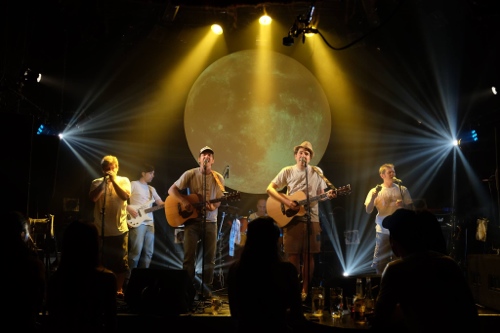 Just so that you know (I had to look it up), a shakehorn is a plastic acorn-shaped shaker percussion instrument that the band uses as often as possible.

You might have thought that JB&TS would have been fronted by a man called Jimmy Binks – but they’re not. This is a six piece band with four of the members coming from the Uk, one from Canada and one from Japan. Last year, they released a five track EP, Not Too Late, that built upon the success of a mini album they named after the band.

A quick FB search does show though that there are a number of people in this world called either Jim, James or Jimmy Binks. One Jimmy Binks would appear to be a lover of Liverpool FC and a keen fan of Elvis; another has recently started working at the VC Summer nuclear station. I wonder if they know about their namesake band in Tokyo? Perhaps, they could all be encouraged to form a choir of Jimmy Binks to singalong on a future release?

If you have access to Spotify, I urge you to check out their tune, “I’ll be in your arms again tonight”. It’s a classic, skewed story tale, littered with the darkest of humour and Country cliches. I genuinely hope it’s not describing a true story.

Quite a few of their tunes seem to describe scenes in which relationships are drawing to an end, pictures of romance gone wrong. I guess it goes with the alt-country territory. It mightn’t be music to make love to but it’s definitely music to love.

One thought on “Jimmy Binks And The Shakehorns – Apple Tree”