The books on my bookshelf were moving. One by one, from left to right and top to bottom, they declared their presence by edging forward and then returning to their original space. The effect was akin to a Mexican wave in a stadium, an epic dance routine and a choreographed shimmer. It was a bit ghostly but I wasn’t scared.

Fuck, these mushrooms were good.

The tune that was blasting from my CD player seemed to be on constant repeat. My sense of time was skewed and hazy as I stared at the shelf, captivated by the swishing novels. Over and over, that same tune played. It seemed like it would never end. But, I didn’t mind. I couldn’t quite compute what was happening. Had I inadvertently put on a 12 inch remix? Or was time just going slow?

The tune – One Of Us Is Dead by The Earlies. How I loved that band.

A few months later and I’m standing with most of the band in a field in Somerset. Brian Wilson has just taken to the Pyramid stage. After an early part of the weekend when the festival was threatened by fierce rain, the sun had shone and the mud was bouncy by this Sunday afternoon. I nodded in acknowledgement and muttered platitudes but, in truth, I think that The Earlies were too enthralled by Brian to notice their fanboy.. And that’s how it should be.

I was over the (super) moon to receive an E-mail today telling me that Brandon Carr, one of The Earlies, is one half of a new band, Corner Suns. The other half, John Dufilho, is also no stranger to my ears having been prominent in the fab Apples In Stereo. I didn’t even have to read to the bottom of the press release to know that this was going to be a marriage made in heaven for me. 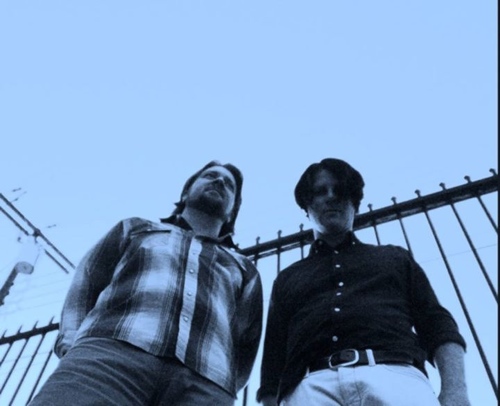 And it is. There’s an album out in January 2017 and I can’t wait to listen to that but for now I’ll indulge myself with the lead track from that album, Borrowed Time. This has cheered me up no end today. I’m older and arguably wiser than I was back then. My sense of my own mortality has definitely heightened. “Down borrowed time I’m running”, emits Carr over this fuzzy dose of psych-rock. I get what is meant.

Those were Corner Suns.