I had to write something at this desk – correspondence from a charming boutique hostal in the old town of Alicante. Downstairs in the Barrio Boutik, the bedroom has a little narrow alcove at the end of which is a small desk. There’s an ornamental lamp on it. And a mirror on the wall. Whenever I look up from the glare of my I-pad, I’m reminded that I desperately need a barber.

The Barrio Boutik is exceptional value for money and a great place to stay. I think that the French owners were a little concerned that I might leave a critical and harsh review about the noise that surrounds. It’s located in a vibrant part of town and I was suitably warned after booking that Saturday night noise can permeate until the early hours. Us hardened festival-goers don’t mind the background beats as we drift off to sleep – and if it gets too much there’s always earplugs. 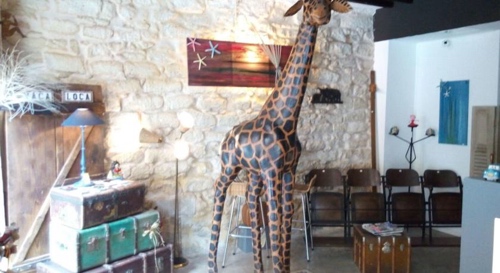 Truth is that the noise is currently pleasant rather than intrusive. There’s a punk club just down the road and if I wasn’t such a loner I’d consider heading back out.

Initial impressions of Alicante are positive. I’m here to learn a new skill but I do wish I was able to speak a bit more Spanish right now. From mid-afternoon, stags, hens and birthday bods have partied with raucous intent, plastic cocks stuck on faces with the dressing all fancy. I’ve felt like an outsider looking on. My ‘holas’ can lead nowhere.

Earlier as I walked up the esplanade, I was stopped by an enthusiastic youngster waving a CD under my nose. “Do you speak English?”, he asked. I was grateful to respond, to feel potentially useful. Turns out that Illumenium are an Estonian metal band. They’re wildly and widely travelling around Europe actively pushing their music into the hands of anybody who might listen. I refuse to feel bad for not buying the CD despite being urged to support a group of struggling musicians realise their dream. Illumenium’s determination is undoubtedly impressive, as is the quantity of their Facebook followers (“We have over 100,000“, I was told, the efforts to impress me by numbers falling upon deaf ears).

Of course, being the music geek that I am, I had to head home to this desk and listen to Illumenium. As I’d suspected, it’s not my sort of music. It could well be decent and the future of metal but I have no critical framework in which to base it. Regardless, I have all sorts of respect for a band that are taking such active steps to promote their music. I’d be keen to know what other Sonic Breakfast readers with a heavier taste might think.