I went to a gig on Tuesday night.. Wrote a review and then forgot to post it.. Whoops!!

I’ve liked Peaness for a few years now. Ever since a friend, an old school teacher of Jess, sent me a soundcloud link of their debut release, Fortune Favours The Bold, (review here) I’ve been urging Peaness to grow.

I wrote about Peaness in my top ten of 2015 (here) and could barely conceal my joy after seeing them live for the first time at Leicester’s Handmade festival (eFestivals review here). 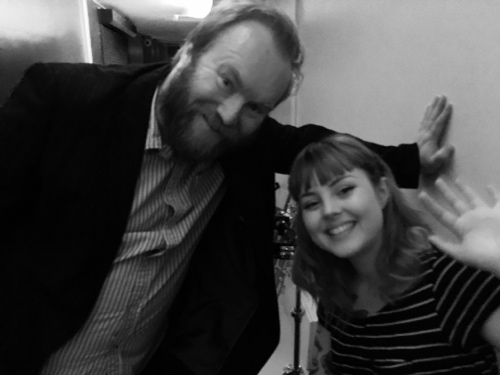 Last night at a free Huw Stephens presents gig at The Social, they once again proved why they’re worthy of full attention. They make a fine sound for a three piece; lovely harmonies and melodies that hark back to your finest summer ever. It might be cold outside but Peaness cheerily warm the very cockles of your heart (and yes, I did use cockle deliberately there).

The trio smile on stage like it’s going out of fashion; there’s no moody faux here or mumbling grumbling. Instead, the between-song banter revolves around Gregg’s vegan rolls, whether or not Huw Stephens is actually in attendance and how they’re heading home to Chester after a late-night radio session (and this gig) because work beckons in the morning. An exhausting schedule but not one that appears to break the spirit.

I go to the gig with a friend, Gary. On paper, Peaness are probably not his thing with his preference being for a meatier (or folkier) sound. But his head sways and toe-taps from the start. “I’d go and see these again given the opportunity”, he reveals.

It is very hard to not love Peaness.

There are a couple of other bands playing this showcase. Caro are tight, competent and destined for bigger stages. They’re not afraid to mix things up a bit though obvious reference points would be Alt-J and Wild Beasts. “Ooh, this one’s very XTC“, says Gary – and he’s most certainly right.

The first band of the evening, Kelora, didn’t entirely grab our attention. But that was no fault of theirs. Gary and I were still catching up after not seeing each other for almost a year and so arrived in the midst of their set. The insane levels of chatter from one table near to us rendered listening to the act nigh-on impossible – but from what I did hear, this was light, uncomplicated pop, not the finished article in terms of a live show but possibly intriguing on record.

Another great night out in London watching music put on for free. And a reminder that gig-going is always better when you’re sharing the experience with mates.