I’ve never much celebrated Halloween. Maybe that’s a generational thing? I can’t recall dressing up as a scene from a nightmare and knocking on doors asking for Haribo chews in my youth. I guess for some the thrill of putting on a witches costume, plastering your face in errant make-up and taking pictures of yourself to add to your favourite social media account is too strong a pull.

Thank goodness that London still has the free gig scene to dip into instead if Halloween does not float your boat. And sometimes those gigs are altogether stranger than the main event. 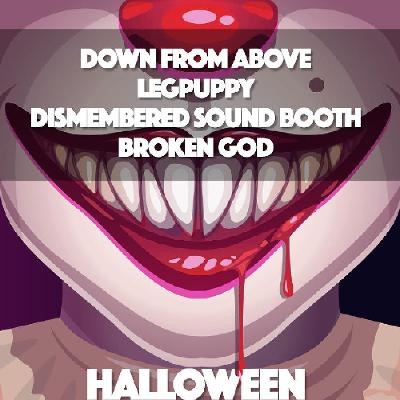 Up at the Victoria in Dalston, there are more than your fair share of zombies walking around, more than you’d get on a typical Thursday. I’m here at one of my favourite London venues for LegPuppy’s Halloween extravaganza. So weird and theatrically out-there are Legpuppy that every day is arguably Halloween for this oddball art collaboration.

But before LegPuppy do their thing, I arrive in time to catch Dismembered Sound Booth’s delightful set of off-kilter revolutionary electro-pop. There are four of them and the two up front who mostly sing have painted their faces as a nod to the night’s celebrations. “You’re so fucking beautiful you make me sick”, they all sing on repeat as a video jumps through all sorts of image on the screen behind.

It doesn’t take me long to realise that I love what Dismembered Sound Booth are creating here. They rant against Hackney trendies, the sadness of alcoholism and celebrity culture, never standing still for long enough to be pigeon-holed. It’s as if Jarvis Cocker formed a group from the remnants of The Shamen, Happy Mondays and Chumbawumba and convinced all that they should perform like Public Service Broadcasting. It’s playful and sinister in equal measure. We all nod at the wisdom of lines like ‘I choose chemicals to make me more conversational’ and delight as the two who take singing duties feed each other fake drinks. It’s doesn’t all make sense – and neither should it. Dismembered Sound Booth end with ‘The Fuck Show’ and we stand gobsmacked.

But that feeling of joyous bewilderment gets higher still when LegPuppy take to the stage. Instrument wise, it’s set up like a DJ set. A man in a leather gimp mask stands behind the box of beats orchestrating proceedings whilst all manner of theatrical things occur around. A spurned bride, dressed to resemble a Tim Burton character slowly strokes a puppy (of the cuddly toy variety) whilst a menacing predator strolls around. Behind both is LegPuppy’s Bez – a crazy dancer who bounces around whilst being buggered by an inflatable ghost. It’s truly something else.

Music wise, LegPuppy serve up some pretty dark, industrial fodder. Lyrically, the angry tone is often lightened by the humour. ‘Selfie stick, narcissistic prick’ runs the chant as the hypnotic rhythm reels you in. There’s points being made and points being scored as the performance builds to a cacophonous convulsion. It’s all simply wondrous.

Another band follow but they seemed blessed with an ounce of normality and after the wild scenes from the two acts I’ve seen tonight my eyes can take no more. I pass ghouls and ghosts, witches and wizards on the wander home but it all seems tame in comparison to the night I’ve had.