I’ve been in Spain for a couple of days now. Yesterday morning, I briefly watched the television as the spectacle of the Christmas lottery unfolded before my eyes. ‘El Gordo’, the fat one, is a tradition, an event that runs back hundreds of years. And the presentation of it all is weird. Schoolchildren sing with tuneful innocence as numbered balls get dispatched from a giant sphere that sometimes turns. They get gleefully teary should they get to announce one of the big prizes. And whole villages cheer when their numbers get drawn as winners. 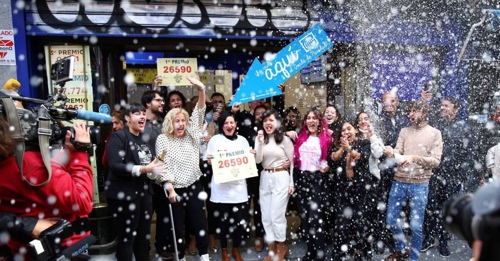 It’s appropriate (in some ways) that number ten in the Sonic Breakfast 2019 top ten is The Lottery Winners and Depression Baby’s gig at the Sebright Arms from back in February. I recall that this was one of my first times at the Sebright and both bands excelled on the night by really putting on a show to behold. Here’s my review of it. (Click, click).

I would have been keen to see both bands again during 2019 but, alas, it was not to be. And now I’ll have to wait until 2020 for the pleasure. In the case of The Lottery   Winners, I notice that they’ve got a Spring tour coming up and one of their stops will be The Lexington, the fine venue just around the corner from my property guardianship. They’ve had quite a year of it with festival appearances and a support slot with Tom Jones to contend with. Their debut album gets released next year and it shows early signs of being a cracker.

Depression, Baby have now played London headline sets – and a festival in Norwich. They’re avid supporters of new and interesting music with their Spotify playlist always making for an interesting listen. I wish that I’d seen their show at The Old Blue Last earlier this year. Video footage suggests they stormed it.

Back with number nine in the countdown tomorrow.