I go to lot of festivals. Indeed, it was the lure of a festival press pass or two that got me into this writing game. I used to think that most people who write about music are pricks; in fact, by and large, I still do. But now I’ve well and truly joined that club with many years of eFestivals contribution in my rucksack.

People often ask me what my favourite festival is. It’s an impossible question to answer. There are so many special ones dotted across the calendar. And they all scratch different itches.

But I guess one solid measure of quality would be looking at the festivals I still pay for tickets for; the ones that, press pass or not, I have to be at. For the past two years, there’s been one in particular that meets that criteria.

Valued readers of Sonic Breakfast – I give you Vida.

Two years ago, when living in Spain, I was told about this mighty gem that takes place in early July on the outskirts of Vilanova i la Geltru and south of Sitges in Catalonia. It was the line up that year that first drew me in. It had been far too long since I’d had chance to see They Might Be Giants and Of Montreal play live and elsewhere on the bill there was more than enough to delight. I had no idea at that point just how beautiful the Vida site is (It’s set in the grounds of a gorgeous house) or what value for money the Wild Side VIP ticket represents.

“Please don’t tell your English or Irish friends about this“, said more than one other Wild Side ticket holder to me in that first year. I could see their point. Frankly, this all felt too good to be true. Nestled beside the country house, this VIP area was a mini festival in itself. As DJs played fine tunes, we would sit on straw bales and help ourselves to the free alcohol. Yes, free –  all beer, wine and cava is free with a Wild Side ticket. For a price of about 150 euros it works out as astonishing value for money. Last year, I told my good friend from Dublin, Rian, all about the Wild Side. This year I’m totally breaking rank and blogging about Vida.

With a cracking line-up announced for 2020, my ticket’s already purchased. In the build-up to the festival, Vida have put on showcase gigs free for ticket holders in Barcelona. I was over the moon to see that this year they’d added a launch party in London. With a line up headlined by Zulu Zulu (previously featured here on Sonic Breakfast), the Sebright Arms was the only place to be last Thursday evening. 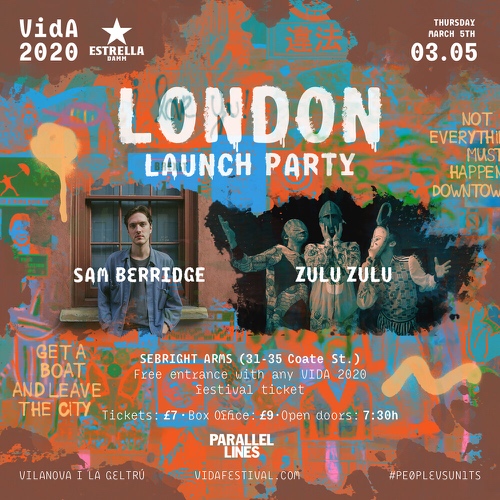 Sam Berridge was up first. I confess that Flyte were a band that largely passed me by, an act that I ought to revisit. Sam, one of their mainstay members, has now gone solo and he’s worth a watch. Happy to be in ‘London’s fashionable East End’, he plays beautiful and literate folk songs on an acoustic guitar, laden with Byrds-like melody. He temporarily discards his guitar to sit at an electric keyboard where he wraps Gilbert O Sullivan, Paul Simon and Paul McCartney up in one easy-listening package. ‘No Soy Gringo’ is his concession to the event, a song written in Colombia and, like the other morsels of joy in this lovely half hour, an intelligent song of love and regret.

Zulu Zulu are a must-see live band. Think Animal Collective or Caribou and you’re part of the way towards envisaging what you get from this trio from the Balearic Isles. Dressed in crazy animal-themed outfits and wearing colourful masks, Zulu Zulu serve up exquisite melody, African rhythm and tribal harmonies; even for the self-conscious, it’s impossible not to dance. As a Vibraphone gets touched and a crazy jazz trumpet blown, the impressive strobe lighting just adds to the euphoric feel all around. It all comes together in a free-form baggy indie that The Stone Roses could only aspire to. This is super-fine stuff.

The party continues upstairs at the Sebright Arms with a DJ playing tunes to keep us dancing. But I’m off elsewhere. The gig has whetted that appetite for the fab Vida festival.