I’m no doubt showing my age by saying that I remember the test card girl. I recall the general disappointment that was associated with the image of the young girl, Carole Hersee, and her toy clown, Bubbles, playing noughts and crosses. If they appeared on the screen when I was up early on a Saturday morning to watch cartoons then I’d know that I was up too early. It’s hard to contemplate now, awash as we are with 24 hour entertainment, that there were times of the day when the TV just had the still of the girl to keep you company. It was either that or baffling Open University programmes always presented by men in brown jumpers, big glasses and bushy beards. It all no doubt explains my fashion choices in later years. 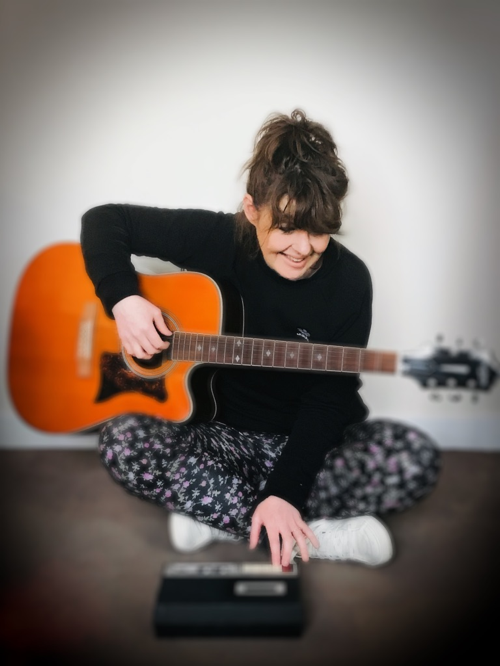 It’s thus a good thing that Catherine Burgis is reclaiming the Test Card Girl moniker for her musical pursuits. Nobody could possibly attach any sense of disappointment to her ‘life-affirming’ electro-folk. With lush, layered vocals and happy melody, Catherine is developing quite a knack for releasing modern day, catchy-as-hell nursery rhymes. There’s quite a buzz forming around this girl from Manchester and Sonic Breakfast endeavours to find out more.

“Ah no secret, just started writing a bit later in life so feel like I’m on borrowed time!!“, says Catherine referring to the fact that she’s seeking pop success in her mid thirties. “Nothing planned yet but dying to get out there and start gigging – I’ve only ever done two gigs just before lockdown when I started out!!“, she says when I ask her about post-lockdown plans.

As an older person who remembers the Test Card Girl the first time around, I’m always going to say that age is irrelevant – but in Catherine’s case, it truly is. Take the universal appeal of second single, If You’re Feeling Down. This simple folk song with exquisite melody was originally written for Catherine’s sister. The positive ‘pertinent reminder to take a breath, look up at the sun, and remember you are loved‘ can surely be applied wider in these tough times.

The most recent single, Don’t Go, builds on the folk sounds of If You’re Feeling Down and amplifies them with top-notch electro swirls. Short and precise, Don’t Go is a tune you can dance along to whilst reminding yourself to stay well away from the bad stuff of your past. It’s blissful pop and will likely help you to smile broadly as you go about your April business.