Whilst others sit at home and watch the deliberations about the Mercury music prize, (best shortlist for many a year despite The 1975 inclusion) I do what I know and head to a gig. It’s back up to one of my favourite venues in this town, the Victoria in Dalston, for a night of noise from three bands who are new to me. 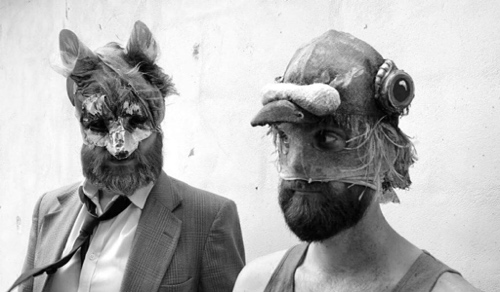 Frauds are the headliners. They justify that billing by being by far the most entertaining of the trio on show. They’re a duo, madcap scientists whipping up punky potions for our aural delight. Mike stands centre stage, monk-cut apparent, slinging his guitar through all sorts of pedals to make quite a cacophony of splintering sound whilst Chris drums in frenzied fashion behind. Both take turns to sing.

You can’t always make out what they’re singing about but you get the sense that Frauds are comfortable with the odd. Whether they’re bouncing on trampolines or questioning our acceptance of fake news, they do so sharing a positive vibe. And the healthily-sized fan base that have gathered respond by jumping into a vibrant mosh-pit.

Nobody moshes for Rope, the second band of the night. That’s because their brand of slightly sludgey stoner psychedelia doesn’t best lend itself to such behaviour. They’re at their most productive when they enter into spaced-out instrumental prog jams but don’t quite feel the finished article to me as yet. Their keyboard/slide guitar player has already pissed me off before they take to the stage by displaying all sorts of off-stage ‘look at me’ arrogance so they have much to do by way of reparations. And when said chap arrogantly hushes the crowd mid-song, my ridiculously petty and judgemental attitudes are further confirmed. In Paisley shirt, Rope’s lead singer tells us that he ‘can show you how to be a real man’. I’m still waiting.

Sans open the night. Without warning and without melody, they offer an off-kilter noise punk that at times veers into angry jazz. It’s like listening to Beefheart in a dentists chair. Their singer hunches his shoulders and emits an anguished scream whilst bassist and drummer look on despairingly. “Why does it sting when I piss?“, they might howl confirming that they probably need to get to a medical practitioner pronto.

News filters through that Dave’s Psychodrama has won the Mercury. It’s fair to say that  it’ll never become a favourite of mine though I can certainly appreciate the talent and art involved in its production. And that’s probably also how I feel about tonight at the Victoria. Each band has entertained even if it’s not entirely been up my street.