The London gigs I’ve been to since January have mostly had decent turn-outs. Even on the stay-in nights early in a week, venues have been throbbing with numbers. Thus, I’m surprised and a little thrown to find myself watching a Monday night support act at the Sebright pretty much as the sole member of the audience. 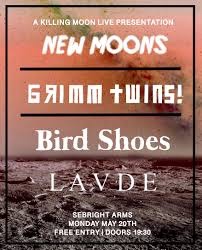 And it’s not as if Lavde, the band in question, are so bad that they’re deserving of the low turn-out. Refreshingly (and despite being acutely aware of the sparseness), this three piece still put on a show. If they’re going through the motions it sure don’t show. Their thing is classic rock; the beardy bass player wears a Slayer T-shirt openly promoting his influence. With some soaring vocals and elaborate almost proggy solos, things go a bit Muse-like for a while before getting back on track with songs that draw upon AC/DC and Led Zep chord structures. There’s rock postures, awkward (given the numbers present) crowd invasions and down-on-yer-knees histrionics. All told, quite enjoyable.

A few more have turned up for main support Bird Shoes but the Sebright is by no means packed. “Hello Wembley, it’s an honour to be here. Thanks for having us”, says the singer of this indie-punk duo who draw obvious numerical comparisons with the likes of Slaves and Royal Blood. They’ve travelled up from Bournemouth, ‘the crack-addict capital of the country’ and pound through their set as if they’re in a hurry to get back. “Thanks for coming out tonight when you could have been at home watching Antiques Roadshow”, says the singer, temporarily forgetting that it’s a Monday night. ‘Door’ is introduced, a song in which they appear as clowns in the accompanying video before all gives way to a megaphone tirade whilst swigging on a can of Stella.

Grimm Twins are worthy headliners. There’s more than a dash of the Buzzcocks about this punk band from Macclesfield. Like Pete Shelley, they’ve got some killer rhyming couplets (“We are Generation Zed, we take our I-phones to bed.”) and the singer has more than a passing resemblance. But Grimm Twins embellish this with a Gallagher sneer and swagger. It’s nihilistic and nonchalant, recent release ‘I don’t care’ full of the existential crisis of youth. “We’re all working tomorrow so wish us luck on the long trek home”, says the singer before launching into their closing number.

I hope they’ve had fun. Nights like this are great. Three bands, not all to my taste, have battled gamely amidst a challenging atmosphere. And for that they deserve nothing but praise.