There are some days when I review the material of an act that I’m keen to feature on Sonic Breakfast and I’m struck by the sparseness; I’m stuck by their minimalism. These are acts that use one word answers in their press releases when truly more will do. They have no stories with which to support their music and convey a nonchalant disinterest about anything they have created. Perhaps the downplay is a deliberate ploy but it doesn’t half make it a challenge to write a blogpost about them.

Kritters are not one of those acts.

In fact, in the space of a couple of months, Kirini and Rob, the ‘blisteringly fast’ duo who form Kritters have produced so much that the challenge is knowing where to edit. This is a blog post that could run and run and they’ve only just begun. Imagine you’re in your favourite restaurant and the food is as exquisite as ever but you’re getting no break between the courses. With three fab electro pop singles released since February, all with elaborate videos to accompany, this is truly an act with a mission. 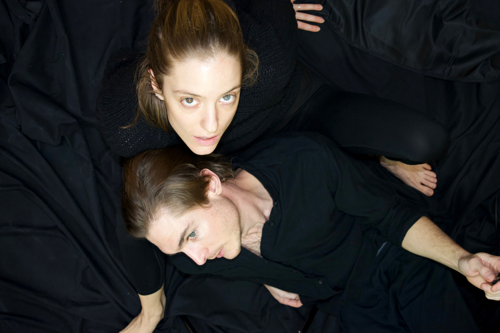 “There’s a method to the madness.“, say Kritters when we chat by E-mail about the frantic nature. “It’s also driven by the knowledge that we have so many songs on deck: Kirini has essentially written the next four albums (and still going!) so we do what we can to stay on top of it.”

You suspect that Kirini and Rob are the sort of people who have hundreds of ideas before breakfast, who are just used to working at pace. I ask them, because I’m genuinely interested how they fit it all in. “In terms of spare time: because we have quite fluid day jobs (we are both private tutors, working mainly online these days) we use every spare second for art.“, they tell me. “And for us art is a very wide net: in addition to making music, Kirini is a visual artist, primarily working in paint but also ceramics and digital collage, and now, too, videos in service of Kritters. This past year she’s also been writing a novel, which will probably take another year to finish. As for Rob, in 2020 he released an album with his last band Stornoway (he was their drummer for 11 years) and so this past year has been all about developing as a producer, something with which he had no experience other than watching the pros in recording studios.”

I initially approach the duo, currently based in New York, after hearing the second single taken from their forthcoming EP, It’s A Trap. Maybe you’re right is a grower, a banger and an ode about wanting to escape from self-imposed isolation. It’s easy to see how such a song resonated with me during this lockdown. I ask the pair how the last year has been and repeat their answer in full because it has such power.

“We live in the South Bronx – the Bronx is a borough of NYC which sits just above Manhattan, separated from it by the Bronx river. The South Bronx is a great area, with the energy of city life but at a slightly slower pace to Manhattan; really everyone should be familiar with it because it’s the birthplace of hip hop. It’s also poor and chronically underserved by city and state government, so our neighborhood was particularly hard hit during Covid: at one point this past year we hosted a nurse who had come all the way from Arizona to help out in the local hospital. It’s tough to really put a finger on what, exactly, we will take away from this pandemic year. It’s been desperately sad and completely strange: Trump, needless death, people swept into poverty. But also remarkably positive: the BLM protests, neighbors looking out for each other, and Biden’s election which also saw the election of Ritchie Torres, who is young and progressive, as our district’s representative in Congress. And for us personally the global pause coincided with Kirini beginning to write music, which she’d always planned on doing, and for once there was little else interfering. So, yes: the highs were high and the lows were underground, but we have hope.”

Since Maybe you’re right, I’ve listened to (and thoroughly enjoyed watching) further releases from Kritters. It’s a Test has a stunning video bringing eight canonical artworks to life, reimagining the women subjects as empowered and not empty vessels for the egos of male artists. The song itself is about trimming our personalities, holding our breath and curtailing our own lives – imposing our own limits to avoid scaring people away. Send me away is a dense and frenzied foray exploring the relationship between anger and insanity; both are blooming fine exponents of the creative and intellectual force that’s fizzing at full flow right now.

Few would predict against the brightest of future for the irrepressible and effervescent Kritters. Take your seat for a wild ride.