I’m none too sure when I first heard Spearmint. It might have been when the much missed ‘Word’ magazine featured one of their tracks, the excellent ‘Scottish Pop’, on their wonderful monthly compilation CD. It could have been as a result of listening to good friend Steve and his effusive praising of the album ‘A Different Lifetime’.

“It’s got a story running throughout that you’ll definitely relate to”, said Steve. The rise and subsequent fall of relationships was undoubtedly my thing back then.

Whatever, I’ve been a fan of Spearmint for the best part of twenty years. And, in that time, I’ve never once seen them live. I do remember trying to get my friend Richard to book them for Summer Sundae after I found one of their CDs lurking in the submissions box. “I’ve never heard of them”, he said, promptly putting an end to that plan. 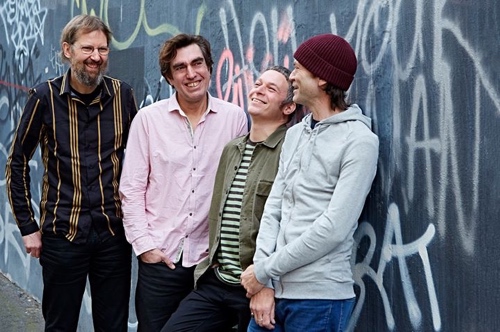 Imagine my excitement then that on a cold Thursday night in London, I’m going to see Spearmint at the Water Rats. The venue is close enough to walk to, just 15 minutes from my new property guardianship. It’s all set up perfectly.

Water Rats is a fab, iconic venue. I’ve been here years ago but not in the last year since I’ve been living in London. A cosy bar at the front gives way to a back room complete with a decent stage, lighting desk and sound system. It seems better equipped than many of the spit and sawdust gig venues I go to; more upmarket, the place oozes confidence and class.

Piney Gir supports Spearmint. And makes a bloody good job of it. Piney is dressed in a stylish, 60’s era, black dress with a swathe of green running through it. Her backing singer dresses in identical fashion but the green dash is replaced by red. The backing band dress with similar astuteness. It’s very mod; stylish, cute and kooky with a healthy amount of maraca shaking. “This one was written during a summer when I listened to nothing but doo-wop”, says Piney before launching into a set highlight,  ‘Peanut Butter Malt Shop Heartthrob’.

Piney’s an engaging raconteur, a bit of a vintage witch and full of ideas about how Spearmint could improve their merch take by selling toothpaste. Most of all though, there’s a smiley joy about this set. Her final song comes with a chorus of ‘I could make you happy every day’ and by the time the song ends few are in the mood to argue. There’s a ton of grinning as we head back to the bar for refills.

Spearmint take to the stage on the dot of nine. They’ve got a lot to get through. Mr. Shirley Lee wears a smart dotted shirt and a skinny red leather tie. It’s almost as if he’s come straight from work. The bulk of tonight’s set draws from Spearmint’s recently released album, Are You From The Future?. And I don’t mind this at all seeing as it’s been on regular repeat since I received a copy. It’s a fine work and, in the live setting, the songs come alive even more. The electro-pop urgency of ‘St. Thomas In The Darkness’ sounds nothing like Band Aid’s ‘Do They Know It’s Christmas?’ but we still laugh at the observation made by an American journalist in interview.

Of the new album tunes, ‘Fireflies’, all about the reliability of memories, really hits the spot. ‘Pick The Paper Up’ sees Spearmint firmly nail their colours to Europe and we all love them the more for that. They’re a band of vintage and they use this experience well. You can’t help but gulp in awe when the gently subtle harmonies between the band come to the fore.

A sprinkling of older tracks are mixed in to keep the nostalgia-heads happy. I guess I’m one of them. I cannot even explain the all-encompassing joy I feel when hearing the likes of Julie Christie, Scottish Pop and The Flaming Lips played live. They are stupendous indie-pop songs. Tonight provides the perfect release from the daily grind.

It all comes to an end far too quickly. The world would clearly be a better place if more people knew about Spearmint.