I’d seen The Wants play when I was down in Brighton this year for The Great Escape. Then, their mix of angular, post-punk style had whetted an appetite (review here) that could now perhaps be sated by a Monday night freebie at Stoke Newington’s finest, The Waiting Room. 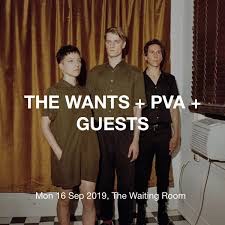 PVA are the support. It’s not until they take to the stage that I’m reminded that I’ve seen them before. I spend much of their opening number trying to get my memory to work eventually realising that it was barely weeks ago at The Old Blue Last, a gig I chose to simply enjoy and make no notes about.

But I recall liking this trio. Indeed, I might have even said so in passing comment to members of this distinctive genre-hopping band when they left that stage. They begin with an electro-punk soundclash banger, a phrase that could be ‘I was feeling so high’ shouted over the top of the track by Ella. PVA don’t want to let you settle though and before long we’re embracing industrial strobes and samples with post-punk dance noise. “I’m losing my voice“, says Ella unsurprisingly before PVA go all Hacienda circa 1990 on us. They pack a lot into this half hour set but there’s still time for Josh to vocoder his voice and take us into skewed dance-pop territory. “Like Cabaret Voltaire crossed with The XX”, says Shane, an impressed and charming screenwriter from LA I chat with in the break between bands.

The Wants are two-thirds made up from members of those other prominent New York post-punkers, Bodega. I guess the maths behind that means you could call this a side project (of sorts).

Dressed all in black with a concessionary pair of red socks, the  image is clearly important. They hurtle through their set; the urgent bass lines funking along whilst stalactite-shards of guitar stab into you. When Madison dances, it’s frenzied and angular; he bends into incredible poses like an action man with stiff joints.

Lyrically, The Wants urge us to feel the weakness as we pick up the pieces. They remind us that they have no intimacy and so are never vulnerable. The cold, clinical tone, deliberately done, heightens the dramatic intent.

It ends all too quickly. “We don’t have anymore”, says Madison after half an hour. But urged on by a crowd left wanting, a quick band chat leads to an encore of sorts; a strident instrumental piece that can’t fail to get us dancing.

Declan Welsh, Scottish indie agitator, is in his stride at the Waiting Room on a rainy Tuesday evening. He’s chatting about his mate, Gary, who passed away a couple of years ago on his 22nd birthday. Declan tells us how Gary was the nicest, most caring and humble man you’d ever be likely to meet. On returning from his own gigs supporting The Last Shadow Puppets (Gary was the frontman of an up and coming act, The Lapelles), Gary was only interested in finding out how Declan’s tour of the North of Scotland had gone. Not an overtly political guy, Gary still had compassion in bucketloads according to Declan. For Declan, who merges the personal with the political so astutely throughout this gig, true socialism is organised compassion. He plays a song, Times, about Gary in celebration of who he was.

Sonic Breakfast is reminded that we saw one of those Lapelles support slots. Nobody could have predicted that just months later, Gary would no longer be charting a path to the pyramid. I reviewed the De Montfort Hall show for the Leicester Mercury but my words about The Lapelles got cut in the final edit. I check back over my notes on the bus ride back home from Declan’s set. They don’t reveal much aside from The Lapelles are from Glasgow; they’re kind of what you’d expect from a LSP support; there’s something about belt and braces, sixties jangle, skinny boys with guitars and pop sensibility. I do remember being quite enamoured with their set though.

It pays to see the support act. If I’m not otherwise engaged I will always make the point  of doing so. Tonight’s support is Natalie Shay and I feel for her. Her crowd consists of me, two relations and polite members of Declan’s band. Despite the low turnout and to her credit, Natalie (and bandmate Joey), still go for it like they’re playing Wembley. They both play acoustic guitars; Natalie doing the rhythm bits and Joey the lead.

Natalie Shay is nearly but not quite an anagram of Shania Twain – and it’s that sort of polished, glossy country-pop that the hair-flicking and head-tossing Natalie seems to specialise in. Made for Radio 2, the growing careers of the likes of Catherine McGrath must give encouragement to this 20 year old from North London. There are strains of Joni Mitchell when Natalie veers into folkier territory. Ultimately though, tonight I want my music to snarl and this is too polite.

On the surface, Declan Welsh and The Decadent West are indie fodder. They’re clearly aficionados of white-boy indie guitar music. This is an act that has consumed the back catalogues of the Arctic Monkeys, Suede and Franz Ferdinand for influence. In their heavier, more spoken-word moments, some of Declan’s tunes give an appreciative nod towards The Hold Steady and the literate storytelling of Craig Finn.

What sets Declan apart though from some standard indie landfill is his political rage. In ‘Different Strokes’ he intelligently rants about the occupation of Palestine having seen at first hand the devastation caused. He brings things back to a personal level by playing tunes about Kurt Vonnegut, provincial nightclubs and heartfelt break-ups. Jumping straight back on the soapbox, he rightly calls out Rory Stewart’s voting record (“Fuck Rory Stewart”) before launching into the set highlight (for me at least). ‘Do what you want’ swaggers with indie-funk as it rallies for tolerant thinking about sexuality. “The stench of Section 28 is just another reason why we should never forgive the Tories” says Declan. (Or words to that effect – I confess I struggle to fully work out his thick, Glaswegian accent at times).

The personal again comes to the fore for the encore. Declan’s fine band step to one side allowing him to play a solo version of Aretha Franklin’s ‘I Say A Little Prayer’. It’s a quality moment and I warm to this lad even more.

It’s a Monday evening and this week’s Airbnb is south of the river. I’m tempted to stay here and chill for it is quite a trek north to Stoke Newington’s Waiting Room. I’ve been meaning to get there for some time but gigs I’ve been keen on have clashed with others; there’s rarely a shortage in this town.

Tonight though Bernardo plays a free show at The Waiting Room in celebration of the release of her Panic Prayers EP. The EP has come out on cassette format. For a fiver, it clearly represents something of a bargain even if I’m pretty sure that I no longer have the technology on which to play it. 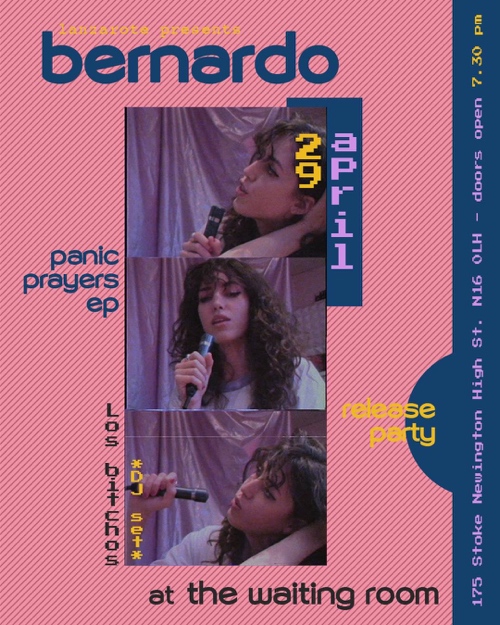 Bernardo’s on-line profile is growing if not fully-formed. I’m guessing that Bernardo is a surname; searches suggest that the confident, enticing individual who takes to the stage in a ‘Betahoven’ T-shirt with a Fender Jaguar guitar to play a jazz-pop opener is called Sonia. “The band have decided to sit this one out”, she declares.

Bernardo’s band duly join her from the next number; there’s four of them (five if you include Alfie, the excellent trumpet player who joins a couple of songs later). They’re a confident bunch, clearly well versed in jazz and funk progressions. In the ‘brand new one’ which might well be called ‘Almost A Mother’, they’re given space to wig out with solo endeavour. Bernardo is impressed. “I often just play alone and it’s great to have this band“, she acknowledges.

It’s hard to get away from Winehouse comparisons. Bernardo’s vocal occupies a similar space and the songs appear to toy with heartbreak and the darker side of love. Bernardo is compelling to watch on the stage. She rolls her eyes , the lids of which are painted in a pinky red shadow, towards her hairline in playful pose whilst smiling and connecting with her crowd. “We’re going to jazz it up a bit now“, says Bernardo before launching into a version of ‘One Inch Punch’. Truth is that proceedings had already been a tad jazzy prior to that.

Just as this short show began with a solo song from Bernardo so it ends in similar fashion. The band leave the stage and two stripped-back tunes bring things to a close. ‘Sunday heartbreak matinee’ stands out, a chilled comedown of a track after a more urgent weekend.

There’s little doubt that Bernardo is one to watch – and I’m glad I made the effort to head north to do so.