As afternoon turns into early evening, I am in ‘The Blokes’. The Blokes, just in case you’re wondering, is a fine bar in Groningen with a decent range of beers and a charming, convivial atmosphere. 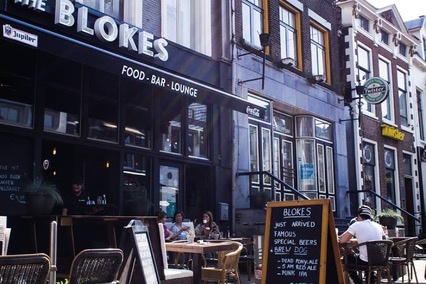 I’m here for the Sony Music showcase. It’s a ‘thing’ about Eurosonic that, in the weeks preceding, your mailbox will fill with invites from labels, promoters and artists suggesting that you head along to their gig. For some reason, I notice the ones where free beer is offered. If finger food is also on the menu then try keeping me away. Does that sound a bit mercenary? It probably is.

The Sony Netherlands showcase is one that I stay at for some time. It’s not just because of the delicious beer and the tasty, hot food delicacies that get passed around on trays by helpful hostesses. From what I can tell, this is a place to watch acts recently signed to Sony. They’ve evidently got a great A&R team in these parts.

Traudes are a revelation. From Amsterdam, they specialise in funky, hip-hop. They have a frontman who climbs on tables to spit out his poetry. He uses gadgets to make his voice go all wobbly, sustained and falsetto. Together with a fine frontwoman, they work incredibly hard to connect with the notoriously difficult showcase crowd. Backed by a band that clearly know their disco and rock, this is a show that gets the whole room bouncing. I order another beer and smile. Life is pretty good right now.

Have I mentioned my love of Eurovision? Loic Nottet will always be remembered amongst my gang of Eurovision buddies as Belgium’s entry into the contest in 2015. On the streets of Vienna, we danced away and hoped that his song, Rhythm Inside, might win the contest rather than come fourth. Tonight at the Sony showcase, Loic chooses not to play the Eurovision tune but instead, accompanied by a backing tape, plays danceable pop from a new album. He puts his all into his angular dance moves and breaks out into a sweat. He winks at audience members as he announces a show with a full band elsewhere in just one hours time. The teenage girls in the front row rush off to grab their spaces at the Forum. It’s best not to be sniffy; Loic is a real talent.

Komodo are the band that are on the stage when I first walk into the Sony showcase. They play classic rock; it’s Led Zep updated for 2018. Sometimes, this is the sort of music that has me running in the opposite direction but I concede there’s a definite charm and hippie talent amidst the rock cliche with Komodo. They’re enjoying themselves on stage and that enthusiasm is infectious. Definitely ones to watch.

The Sony showcase isn’t my only one of the evening. I arrive at The Blokes after a pleasant hour or so at Oost, a recently renovated club space in Groningen. I’m there for the V2 Records and Radar Agency. It’s honestly just a coincidence that I leave when the free beer runs out but I have been able to see Sunbow before I go. An atmospheric indie three piece, I’m unable to find out much about them online. This is a shame because they show glimpses of greatness. Their singer asks for the lights to be dimmed and once his wishes are granted we enter into smoky, club mode. It’s barely 5PM. There’s plenty more enjoyment to be had as afternoon turns into evening.