I’m not really a writer who criticises much. It’s not my style. There were a few times in 2019 when I was less than effusive and one in particular that sticks in the throat. That March night and my review (here for reminders) at the Shacklewell Arms of the great TETINE and Fake Turins was also marred by the appearance of geriatric -rockers, Voodoo Rays. It seems appropriate that such a night should take number three billing in the Sonic Breakfast top ten of 2019. It’s the only top ten that Voodoo Rays will find themselves in this year.

Voodoo Rays weren’t best pleased with my review as evidenced by this response.

Thanks for the review.

I’m sorry our drummer almost knocked your pint over last night. The care home he lives in locks its doors at 11, so he has to rush to get back in time. I’ve tried to order a book on gig etiquette for him, but there doesn’t seem to be one available. You seem to know a lot about it- perhaps you should write the definitive text?

It’s a shame that you didn’t have time to talk about the music more; we’re always interested in sprightly well informed criticism of our songs. I think all I picked up was that we shouldn’t be so old. Rest assured we’ll try to be younger next time.

This is at least quite witty from Frank though. I also revelled in altogether less pleasant prose from another member of the band that’s not worthy of publication.

It’ll come as little surprise that Voodoo Rays did not feature in the BBC Sound of 2020 list. But they have played gigs in small venues in 2019. In 2020, they’ve entered a competition to play a festival. Bless them!! Still, I’ve resolved to be a much better person this year and if that means being invited to a Voodoo Rays gig and eating humble pie when they’re actually bloody brilliant then so be it.

A Fake Turins show featured elsewhere in this top ten (here) but they’re such a fine band I’ll give them two bites of the cherry. In a couple of Friday’s time, they are again playing at the Shacklewell, a headline set in celebration of a new single. It’s free and I’ve reserved my ticket on DICE today. So should you if you know what’s good for you and you don’t want to miss out.

TETINE haven’t played in London much since this odd night. The duo have been involved in all sorts of artistic endeavours though both here and back in their native Brazil. Their contributions have filled art galleries; they’ve DJ’d in dungeons and pushed the boundaries. They remain a thing to behold.

Back later with the top two of this slow, arduous and arguably quite pointless countdown..

My working week in London is nearly done. After a training day tomorrow, I head out to the countryside (well, Peterborough and Leicester) for a weekend break from the constant go. I can’t help myself. This is a city that never sleeps and so I oblige by rarely nodding off. It helps that the bed in this Airbnb is basically an instrument of torture. 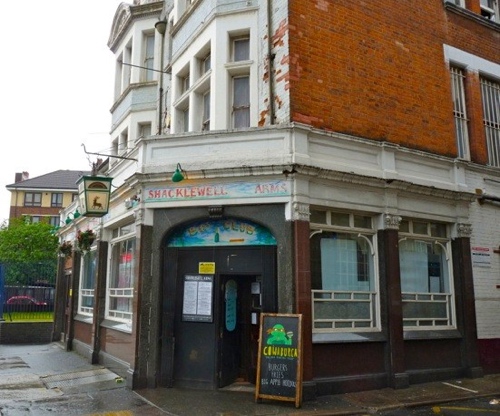 But I won’t grumble. Instead I’ll just make myself scarce and head off to another free gig. Anywhere else they wouldn’t be free but there’s just too much choice in this town. It’s back to the Shacklewell Arms tonight. I enjoyed my first trip there (reviewed here) and this is a chance to see three more bands.

I arrive just as Voodoo Rays begin. I don’t want to be ageist – indeed, I’m no spring chicken myself – but it’s fair to say that Voodoo Rays have age on their side. It’s something of a surprise then that life experience doesn’t seem to have given any of these losers insight into gig etiquette. They’re not astonishingly awful though I do find myself hoping that somebody will tell them they’ve over-run when they casually enquire ‘how much time have we got left’. They play ‘new ones’ which seems to be code for ones we’ve not fully rehearsed.

What really gets my goat – and swings my mind towards slamming Voodoo Rays – (regular readers of Sonic Breakfast will realise this is a rare occurrence) is their attitude post gig. There mightn’t be space to leave kit anywhere at the Shacklewell but it’s just bloody rude to spread yourself out alongside the wall with a shelf – the only place where punters can rest their beer glasses. The drummer excessively and possessively fiddles with kit like nobody else here matters. He’s oblivious to anybody else around him and by the time that he pretty much knocks my beer out of my hand, swinging the bass drum on his back like a snail on speed, Voodoo Rays music has long since ceased to matter.

Fortunately, things quickly take a turn for the better. There’s six, no make that seven, members of the Fake Turins crammed onto the Shacklewell stage but despite the tight fit they’re all more than aware of their personal space and role in the band. There’s no getting away from the Talking Heads comparisons here. Their lead vocalist takes the mantle of band leader in a manner reminiscent of David Byrne as he conducts the rest of the troupes through their funked-up art jams. Intuitively, they know when to build and when to fade. He takes a David Toop novel out of a jacket pocket and proceeds to read from it; the spoken word of the prose creating an effect not unlike that you’ll get from Bristolian stalwarts, The Blue Aeroplanes. Fake Turins are good and they know it; despite unnecessary interjections from recorder and cowbell, there’s more than enough bass, bongo and backing vocal to stop this from being a dud.

Tonight’s headliner, Tetine, are from Sao Paolo though I’m led to believe that they spend a fair bit of time in London these days. The duo of Bruno and Eliete originally present as a pretty traditional synth act with added bass. Full of beat and disco excess, they’re never anything but entertaining. Eliete leaves the keyboard to fend for itself and takes centre stage during Mata Hari voodoo, an early set-highlight that begins in contained control but ends with Eliete as a person possessed, speaking in tongues in squat position.

I don’t get to hear what the song title is but over the chorus of a disco-pop banger, the words ‘I was falling in love’ entices a couple in front of me, who are clearly in the first throes, to start dancing energetically. My smile is enduring.

Bruno’s bass is discarded with and Eliete again leaves the Roland running for Tetine’s very own ‘Beastie Boys’ moment. Lick my Favela is a Brazilian reworking of ‘Fight For Your Right’. It’s seedy and performed seductively. It’s only later that this correspondent realises that the Favela is not a body part but a slum area in Brazil. One suspects that there’s a political angle to this art and it’s not just a hedonistic party.

London’s given me another top night despite the slow start. I splash through the puddles on the way back to the Airbnb without a care in the world.