Tonight’s been another showcase night.

The shed is an earthy grunge of a venue. Every city should have one. 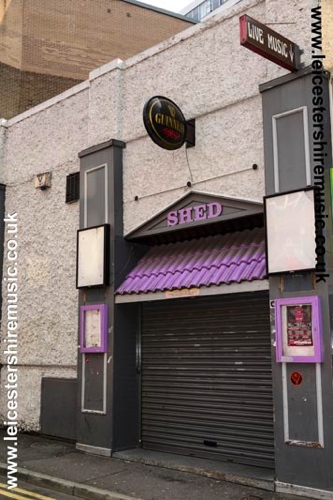 The shed is a legendary Leicester venue. It’s the venue where Kasabian developed their craft (apparently). It hosted the Arctic Monkeys the only time they’ve played in this city (to my knowledge). I walked in and was met by Kevin, the owner. He has always been a charming man. He still is. It was like I’ve never been away.

Five bands on tonight but I’d like to feature Abandon Her. I’ve seen them before and even though that was more of an acoustic affair, the talent dripped through and I resolved to see them again. Abandon her are a band of hers and a drummer called Giles. You’re not going to get rock posturing from them but instead it’s polite, clever, AOR harmonies over guitar and piano pop. They have a tendency to slip a few too many covers into their set for my liking. On the evidence of tonight, they don’t need to for their own songwriting stands up to critique. It’s infectious, singalong pop which probably bypasses Radio 1 and heads straight for Radio 2 territory. This is no bad thing.

And that perhaps means it’s not for everyone.

But, when the city is populated by boys with guitars singing in Sheffield snarls in an effort to impersonate Alex Turner, I say good on Abandon Her for ploughing a different field.