My review from last weeks Spring Off The Tracks festival is complete and published here.

I’m on the festival treadmill now, running ever faster to keep up with the demands of pretty much doing one a weekend throughout the summer. Later today, I head across to Cheltenham for the Wychwood festival.

If Off The Tracks taught me anything (I think I was aware of this anyway) it was to not be fearful of jazz-rock experimentation. A few years ago, a band described in a programme in such a way would have had me running for the hills afraid that I had finally lost my marbles. 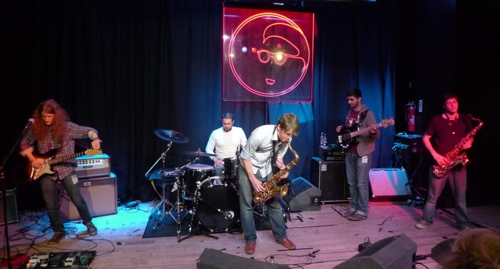 But, Sheffield- based, King Kapisce are described as jazz-rock and they were one of the OTT highlights. To call them jazz-rock omits the other influences that mix into this cauldron. It was impossible not to tap a foot, to shake a head or to stroke a beard (I don’t have one but the man sitting behind me didn’t seem to mind) over the sounds they created.

They normally have two sax players to pump stacks of soul over a complex mesh of drum and guitar-led sound. But at OTT, they offer humble apologies for one of the band has left them for a holiday in America. We didn’t need to know this. There’s enough going on without needing more.

King Capisce make instrumental music. Their new record is ‘The Future Cannot Be Born Yet, It Is Waiting For The Past To Die’.

Regular readers of Sonic Breakfast might have noticed that I’m somebody who often gets excited about lyrics. The fact that King Kapisce are completely instrumental is not a hindrance. I closed my eyes during their set and let my imagination run wild. I climbed that tree and jumped across the tops. I threw myself from that plane and flapped my arms like an eagle with wings. I surfed on that wave until it washed over me.

Try it out yourself. Where might this take you?