January isn’t an easy month for live music venues. Many of us have overspent and over-indulged in the build up to Christmas and so as a result we become austerity hermits on health kicks. We’d rather relax with cups of tea and home comforts than brave the frequently freezing world outside.

The excellent ‘Musician’ venue in Leicester has, however, found a neatly compelling way to drag me from my sofa. Now in its fifth year, OBS unplugged is the acoustic little brother of the band showcase that I featured last year here. Running over ten or so nights in January, promoter Val McCoy puts a heap of effort into ensuring that the line-ups are varied and interesting. More established acoustic based acts mix with those newer to the scene. Gems are often unearthed.

Last night, I went along to the first of the 2015 series. It was a night in which quality shone through. I bought my first EP of the year from Birmingham-based songwriter, Guy Jones which I plan to review on Sonic Breakfast in the coming weeks. I can’t actually remember the last time I bought a CD at a gig.

And then there was Lucy. 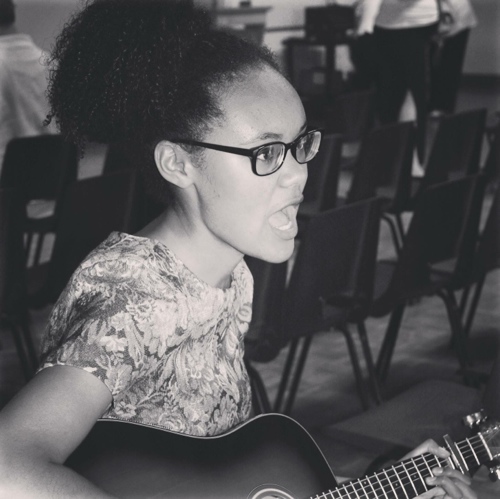 Lucy Davies-Kumadiro is a 17 year old singer-songwriter from Loughborough. Last year, she played her first ever gig as part of OBS unplugged. Everyone who saw that set knew that they had witnessed something pretty special. With a calm charm and serene style, Lucy’s delivery melted the most cynical of hearts. When I overheard a punter at Leicester’s Simon Says festival enthusiastically ranting about ‘the most wonderfully stunning artist who was a hybrid between Lianne De Havas and Kate Nash (before she got punky)’, I gave myself a secret pat on the back for already realising how captivating a live performer Lucy is.

A year on and Lucy plays OBS unplugged again. Her guitar playing has developed over the year as has her on-stage banter. Her pristine and pure voice has always had the ability to melt hearts but there’s now an added layer of soulful husk that sometimes comes to the fore. She plays a new song, only finished the night before, about how when you run it’s not always an act of running away. Lucy is following a dream and heading off to University in America in the next year.

If you’re at a loose end an in Leicester over the next couple of weeks I wholeheartedly recommend having a peek at the listings and taking a trip to the Musician. OBS unplugged can get you through January.