Still much to write about before we can say a cheery farewell to 2016 and hope that there’s brighter stuff in store for 2017. I’ve got a couple of distinct Christmas videos to post and in the final week of the year I’ll publish my Sonic Breakfast top ten.

But, today I want to focus upon Crushed Out. I’ve watched with growing admiration as new videos have been released to accompany their album from September, Alien Ocean. From the time I first watched the video to Skinny Dipping through to yesterday when I admired Rolling In The Moonshine, I knew that Crushed Out were the sort of band that Sonic Breakfast readers would go wild for. 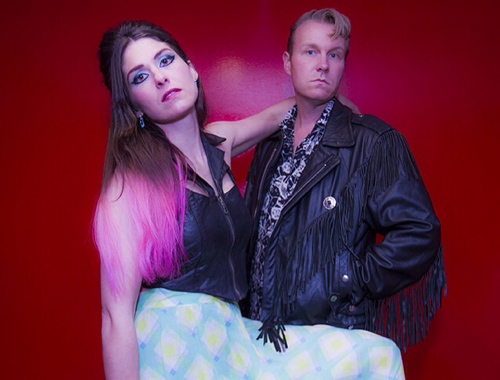 Crushed Out’s  thing is a sort of out-of-this-world comic book psych-surf. Arty without being obscure, accessible without being obvious, there’s something about all of the tunes on Alien Ocean that simply make me smile. They creep up on you when you’re least expecting it and tickle you under your armpits or on the soles of your feet. They give you that warm goo in the tummy.

Crushed Out is husband-and-wife team Frankie Sunswept on guitar and Moselle Spiller on drums. I’m told that their live show (they’re often touring around the US) features an immersive David Lynch-ian Tiki bar stage world complete with electric palm trees, black flamingos and much that you’d expect to find at the shores of an Alien Ocean. Sounds fab and I’d love to see them tour the seaside towns of Britain in 2017.

For now, let’s start developing that crush for Crushed Out.