I’m back from Eurosonic in Groningen. Now the hard work begins as I piece together the jigsaw of events in an attempt to make a coherent review for eFestivals. Suffice to say, I’ll be singing the praises of a fantastic event.

Forgive me if the blog goes quiet for a few days whilst I’m working on that. The day job remains busy and I don’t have a massive amount of spare time. I did want to publish this piece first though.

Jono has been a friend for a number of years. He’s a man to know in Leicester with his finger in many pies. I don’t know much about studios but friends with more expertise than I’ve got tell me that his studio (Yellowbean) is one of the best-equipped and supportive across the Midlands. Jono sings in a Madness tribute band, Gladness; he has the trust and ear of Dean Jackson, the excellent BBC Introducing DJ for the East Midlands (who I once blogged about here). Every year, he organises a fab skiing trip for mates (I went one year and, in truth, struggled on the slopes). Jono’s an avid Leicester City FC fan and a very friendly and sociable guy. In truth, he’s one of the good people on this planet and I ought to drink beer with him more than I do. 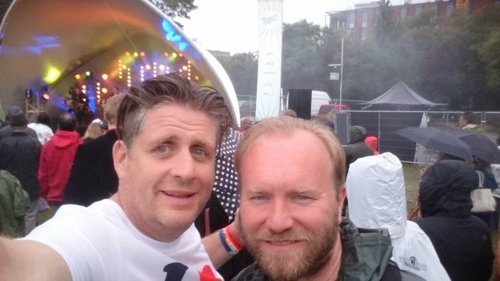 So, when a stranger gets in touch with you saying that they’re a friend of Jono’s and he’s sent them your way, you sit up and listen.

(To find out more about that stranger click on page 2)