“You have to enjoy it no matter how stupid things get, ‘cause we always have each other and you always have yourself.” – Joel Gion, 2016

The film, Dig!, had quite an impact on me when I first watched it at the local arthouse cinema. I probably left the cinema and said to friends that it was the best music documentary ever made though I’ve always been prone to hyperbole in an effort to stress my point.

But, there’s no getting away from the fact that there’s something hopelessly desolate and tragically romantic about the way it tracks and contrasts the careers of the Dandy Warhols and  the Brian Jonestown Massacre. It’s sometimes not pretty viewing but it’s always exciting. As one band digs towards a drug-fuelled, psychedelic oblivion, the other spends millions on state-of-the-art videos. Creatively, we all know which band we’d want to be in – and it’s not the Dandy’s. 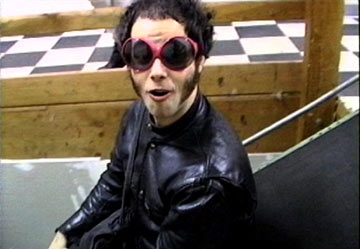 Joel Gion, the tambourine player in the Brian Jonestown Massacre, creates quite an impression throughout the film. He’s a cheeky space cadet and, for the most part, you can’t help being drawn to his impish humour and honest charm. Despite being off his head, you like him and want him to succeed. You worry that the story might have a tearful ending given the amount of abuse going on and breathe a sigh of relief when it doesn’t quite.

Over the past weeks, I’ve received a few E-mails from Joel’s PR company telling me about his new single, Tomorrow, which was released last week in advance of an album later this year.