“I think you’ll really miss being able to go to gigs every night of the week should the mood take you.”

That was the prediction of a few people when I told them that I was moving away from the hustle and bustle of Leicester city centre and heading to this remote Spanish villa. It’s true that the nearest small town is a three kilometre drive away and that karaoke and Michael Jackson tribute acts reign supreme but so far I’ve not missed the live gigging scene. To be fair though, I have been in the villa less than a week.

And, despite the lack of gigs, it’s not as if I’ve had a live music drought in the weeks I’ve been waiting for crazy dog woman to vacate the villa. Before heading up to Lisbon and Eurovision, I spent a lovely weekend in Murcia for the ‘Warm Up’ festival. Kasabian and Alt-J were the bands at the top of the poster but it was probably the Spanish alt-indie acts that got the biggest cheers from the partisan crowd. Next week, I’m heading up to Barcelona for Primavera Sound. I’ll be reviewing it for eFestivals and fully intend to dig deep beneath the surface. Tomorrow, there’s a spring festival in Alicante that I might explore after getting my beard trimmed by a trendy barber with blue hair.

Jonathan Bree travels from New Zealand to play his first ever UK dates in August. It’s an odd-looking three date mini-tour beginning at the Rough Trade store in Bristol and ending at the mightily-fine looking Visions one-dayer down in Hackney. Sandwiched in between these dates, Bree plays the Soundhouse in Leicester. As great a venue as the Soundhouse is, I still see this as quite a coup for the place. For Bree is brill and him and his band have an out-there image to boot – full white masked body suits and bowl haircut wigs. I let out a little yelp when I realised this was one show I wouldn’t get to see.

His genius is more than evident in the recently released video for ‘Boombox Serenade’. Like a warped Magnetic Fields (if such a thing is possible), Bree plays with all sorts of iconic images as he rides in on a horse to woo the woman of his dreams (with a Boombox). The music won’t be too everybody’s taste (for some it’ll sound like the batteries on your Boombox are fading fast) but I find the combination of baritone croon and changing tone delightfully woozy. The awkward romanticism is right up Sonic Breakfast’s street.

‘Boombox Serenade’ is the fourth track to be released from Bree’s forthcoming album, ‘Sleepwalking’. Each of the previous three singles showcase this man’s peculiar knack for skewed songwriting. From gallic glamour to more traditional electro-pop and all with the distinct voice, this is something to get excited about as summer settles.

Afterlife, the new album from Left With Pictures, mightn’t be officially released until April 29th but I’ve had a sneak preview. It’s a laidback yet confident work; big themes of death and rebirth are considered within the gentle chamber pop on offer. The beautifully arranged strings and keyboard flourishes are often embellished with choppy bits of electronica to make this a tad special. 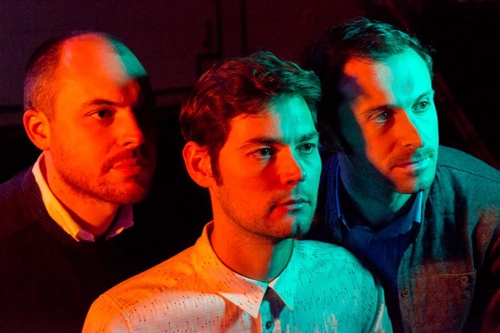 I’m embarrassed to admit that I didn’t know much about Left With Pictures before listening to ‘Afterlife’. And yet, they’ve been around for ten years. Over that time, the band has won critical praise and steadily refined their craft of inventive pop music, where the acoustic and the electronic are intricately combined. Afterlife will be their first release in five years.

It opens with ‘Multiplex’, an orchestral brief instrumental that sets the stall out for what will follow. This isn’t the album’s only instrumental track. Later, perhaps at the start of side 2 if this was a vinyl release, we get ‘Who’s there’, another short piece. That sense of shadowy menace is never far from the surface. But who is there?

Something is knocking and I don’t assume that the diagnosis is good. As early as the second track, ‘Bloody Mess’, we’re told, in a tune that could be lifted from Love’s ‘Forever Changes’, that the protagonist is ‘waiting for the moment to come when you know that you’re done’. Such starkness is hauntingly followed up in the next track, Terra Firma. ‘One day, I’ll find you at the waters edge’, they sing.

There are moments of respite. Within the jaunty keyboard riff of ‘The Start’, Left With Pictures prove that they can write a pure pop tune if forced. “Might this be the start of everything?” is the optimistic opine. This track follows the beautiful and cinematic ‘Stage Fright’, that sad waltzing moment in any Hollywood film before it all works out in the end.

But, when the resolution does arrive in final track, ‘The Night Watch’, it’s not complete glitz and glamour. Amidst shimmering, fizzy loops, we acknowledge that ‘all who love you will be there‘. This is the last rites; the album’s final goodbye.

Throughout, this is an album that contrasts the positive and uplifting with the unbearable lightness of being. It’s themes are challenging but it doesn’t make it inaccessible; for, at their heart, Left With Pictures remain a band that produce clever and captivating, interesting pop.