Cast your minds back a couple of months if you will? I published a post when I was just back in the UK from my long retreat in Spain to talk about the fascinating dreampop duo, Moontwin. (Piece here). Moontwin create their music from separate places, one in  the UK and one in Bulgaria. It doesn’t seem to impact upon their quality. They’ve released another track since early February. ‘For Your Happiness’ deserves attention. 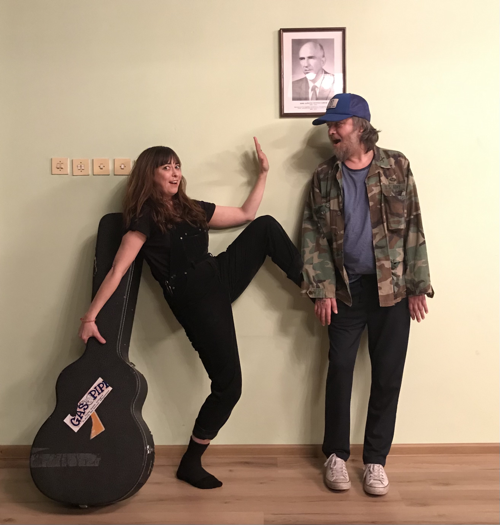 Single friends of mine tell me that they’d like to meet a partner, perhaps ‘the one’ for them and then their lives will be complete. I scoff at their assertions and suggest that they might be putting too much emphasis on the power of the other. They tend to concede that I’m right but still their search goes on; they copy and paste profiles onto dating apps saying what they think they’ll need for happiness. They should look within.

That’s what Moontwin’s ‘For Your Happiness’ is about – “our obsession with idealised, romantic love and the desire to seek our personal salvation through ‘the other’“. Centred around some deliciously stark spoken word from Hunter S Thompson’s The Proud Highway’, here’s a tune layered with rich melancholia, sinister progression and standout vocal harmony. Much is packed into the song’s three and a half minutes – exactly what Sonic Breakfast readers expect from their Monday morning tune.

I ask the Moontwin duo what they might need to ensure their own happiness. “Happiness would be assured with an abundant supply of fine cheeses and wines to help navigate these trying times.“, says Mellie. I’m sure we can all agree with that. “Ideally accompanied by lashings of warm, buttery, yellow custard and baskets of kittens in lace attire.“, she adds more controversially.

‘For Your Happiness’ is definitely not about meeting your dream lover.

I’m almost asleep. I can feel myself dozing off into dreamland. A game of cricket that I played in 2008 comes to mind; it was windy and icy then, certainly not the summer weather that one associates with the sport. With no obvious logic, I’m now an extra in the cast of the film ‘Titanic’. I’ve never actually seen the film but here I am appearing in my very own version. Icebergs ahoy! As I look out to see the white mass in the distance, it becomes a gigantic Christmas cake, the icing crisp, the decoration beautiful and intricate, much like my late Nan used to make. Red ribbons, green garnish. Deep breath. Sleep.

Moontwin’s ‘Waiting For Fall’ also “explores the twilight world that exists between dreamstate and waking“, according to their press release. “A fluid, shape-shifting space where conversations, random moments and thoughts can sneak into our sub-conscious, often revealing new meaning and unexpected significance..”

I’ve never really paid close attention those random thoughts I have on the edge of sleep. Perhaps I closed my mind to them because I thought that I was a bit strange for imagining such things as cricket, icebergs and Christmas cakes. I’m glad I’m not the only one.

The Moontwin duo, Maple Bee (Melanie) and Zac live 1700 miles apart, one in Bulgaria and the other in the UK. I ask them how such remote working can work. “For Moontwin it’s pretty much normal for us….”, they say. “We have worked and hung out together online for the last 4 years! – so where ‘screen life’ and socialising online has recently become the norm for the larger population it’s business as usual for us. We did manage to meet up in Plovdiv, Bulgaria just before the Covid-19 situation took serious hold which was amazing…we were supposed to be touring the UK at the end of last year…obviously that didn’t happen but we are keeping busy working on the new record and making videos to go with each release we put out.”

If those releases are as grand as ‘Waiting For Fall’ then Moontwin have a fan in Sonic Breakfast. Always a sucker for a bit of spoken word verse, this tune has it in bucketloads before a wispy, ethereal and dare I say it, dreamy chorus chimes in.

Excuse me whilst I grab twenty minutes more sleep before Monday kicks in?

When I’m living somewhere for any period of time, I try to immerse myself in the local music scene. I read Internet forums and regional newspapers to find out about what’s going on and I make an effort to check out interesting venues that are near to me. It’s only by being curious about the musical culture of an area that I can truly get under the skin of a place. And aside from that – it offers a fantastic way to meet people and to begin to feel part of something.

Maybe it’s because I’m far from fluent in the Spanish language and certainly the fact that we’ve been living through a pandemic has not helped but I get a sense that I’ve only ever scratched the surface of any local ‘scene’ here in Catral. Perhaps things don’t really extend much beyond the tribute acts and karaoke specialists who relentlessly tour the ex-pat bars (when they’re able to open). I’m not sure I believe this. There must be bands from Catral, Alicante, Elche or Murcia producing new music that would delight regular readers of Sonic Breakfast. I’ll continue to explore (virtually) over my final few days here.

Cine Nuria, a duo from Catalonia, come from slightly further afield but I couldn’t help not to be drawn to their recent single ‘Lo Bonito’. It’s a dreamy shimmer of a song; a chilled airy vocal runs over the top of an electro-pop thumper to entice you in. My Spanish is not strong enough to pick out all of the lyrical meaning within but we’ve definitely got meteorites, black holes and illuminations making an appearance here. “The song represents the rollercoaster of emotions, the different states that two people go through when they are immersed in an emotional relationship.“, I’m told by the press release to help fill the gaps.

I ask how things are up in Catalonia right now. “We are fine, but we have a municipal confinement. That is, we cannot move from our town / city. It’s very heavy.“, I’m told. “We are preparing a new 4 song EP for March.”

We’re left with little option now other than to make our beautiful discoveries online. We all look forward to a future when we can again go to local music venues to spot new, up and coming talent. We can only hope that those venues will still exist when the time comes.