The rain is pouring and the leaves are falling. It’s a trudge through the congealed sludge of Autumn’s detritus as I make my way to Leicester O2’s Academy to see Eliza And The Bear. “We’ve never been to Leicester before“, announces lead singer, James Kellegher, towards the end of that set and you find yourself wishing that they’d seen it on a warmer, sunnier day.

For Eliza And The Bear’s singalong, sunny, festival-friendly brand of rocky pop is best perhaps imagined when accompanied with a cider in hands and the heat beating down. The largely female audience here, at this O2 bar that’s attached to Leicester University, are doing their best to relive their post-A-level states of bliss by mouthing along to the words from the songs they recognise. The marching, uplifting beat elicits raised, clapping hands from the Freshers. Fan girls at the barrier exchange glances with each other when they sense that guitar player, Martin Dukelow, has flopped his excess of blonde hair in their direction.

It’s difficult not to get caught up in this sweetness. There is an undeniable charm and happiness about the proficient pop that Eliza And The Bear produce. “I’ve got friends. I’ve got family here“, sings James in Friends, the set opener. It’s this inclusive tone they establish that remains throughout. They want you to be their mates, because they are all mates together. They’re more than happy to chat with you at the merch stall after the gig. They sympathise with support band, Lisbon, who have had much of their gear stolen the previous night in Birmingham. Bands often seem to get their kit nicked in Brum. 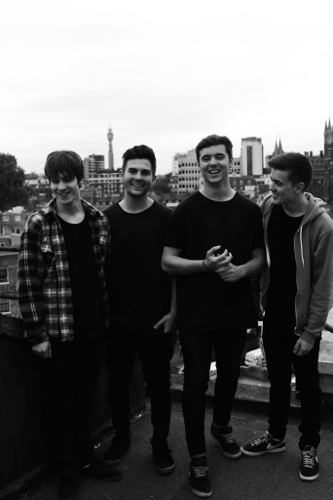 I only managed to catch the last three numbers from Lisbon but any unfamiliarity with their instruments doesn’t show. On the evidence of tonight they come from that same sunny factory as Eliza And The Bear. There are backing tracks adding to the layers here but nobody in the appreciative audience seems to mind that. A general tick in the box from this direction and I’ll mark them down as ones to watch in full when I next get the opportunity.

Eliza And The Bear do not seem to be lacking in equipment. This is a show in which their guitar tech is kept pretty busy with Fenders being replaced by Gibsons. Towards the end of the set, Martin is handed an acoustic guitar and the rest of the band, apart from James, leave the stage. It’s the obligatory chilled-out moment and a chance for this duo to show off their vocal and musical talents. The girls at the front don’t need sunshine to melt at this point.

“We’ve spent a year now writing our debut album and in two weeks time, once this tour is done, we’re going to head into the studio to record it,” offers James during the set. On the evidence of tonight, a spring release should set Eliza And The Bear up nicely for some sunny, Summer days.

Eliza And The Bear were previously interviewed by Sonic Breakfast. You can read that interview here.

So, here’s something I’ve not done before on Sonic Breakfast….

But I got the chance to E-mail some questions to Eliza And The Bear in advance of their headline tour that kicks off at the end of this week in Brighton. I’m planning to see them live when they reach Leicester in a few weeks by which time the internet will be full of tales of the quintet’s rock n’roll excesses (perhaps).

It was Martin from the band who responded….

For the uninitiated, how would you describe Eliza And The Bear?

Given that none of you are ‘Eliza’s’ or ‘Bears’ (from what I can tell), has the name ever proven a hindrance?

Its never really created any problems, we just get asked “where is the bear” or “who’s Eliza” a lot. We always just tell people that the closest we have to a bear is our bass player Chris who is undoubtedly the hairiest member..

A summer of festivals completed. What’s been the best thing to happen to you at a festival this summer?

We played a lot of awesome festivals this year. It would have to be between the moment when Thom Yorke of Radiohead camped next to me in Leo and our set at Y-Not.

And now a pretty big headline tour.. What might the audience expect? Any special surprises? Which of these shows are you most looking forward to?

We are playing quite a lot of new material on this tour which we are all looking forward to. To be fair i am bias, but i would have to say that London is the one I’m looking forward to most. Its the one in which all our family and friends are at and always cause for celebration!

What’s the best and worst thing about touring?

Best thing is meeting people and seeing what each place has to offer in terms of hardcore nightclubs. Worst thing is the hygiene of some of my fellow band members. I won’t name names….

Early reviews of ‘Eliza And The Bear’ that I read suggested that you were a happier version of the Flaming Lips. Fair comparison or is there something else you aspire towards?

I think its a fair comparison. To be fair we have had that a couple of times but i think the Flaming Lips reference is unintentional as most of the boys haven’t really listened to them that much or at all!

Your music has accompanied quite a few adverts and TV programmes over the past year. Which of these has made you proudest? Are there any products that you wouldn’t endorse and if so, what are they?

Mine would have to be Match Of The Day. Im a West Ham fan and they actually managed to lose on the day we got played on it. Didn’t make it any less special though to be fair. Well Callie (our keyboard player) is vegetarian so i can’t see us doing Meat Weekly or something like that..

Scottish people are about to vote on whether Scotland should go it alone. How would you vote?

In the words of Al Green “Lets Stay Together”

And finally – I’d say it’s been a year of steady progress for Eliza And The Bear. What are your hopes and dreams for the next year?

I think we just hope that we continue the way we have been, seeing a rise in people hearing our music and coming out and enjoying our shows!

So – there you are. Anybody who managed to catch Eliza And The Bear at Y-Not will probably already have tickets to one of their shows. Live music is there to be supported. You’ll have a fun night out. It’ll certainly be better than staying in watching Strictly or The X Factor.