I’ve had a lot of time to write on buses in this past week. But, a lot of time does not necessarily equate to a lot of output. Instead, I simply chilled and slept as I travelled from Murcia to Madrid and then onwards into Portugal and Eurovision.

I write this from a small terrace outside a tiny supermarket at the top of a hill in Lisbon. I’m drinking a can of Sagres, a treat having just walked up a monster of a mountain lugging my current life possessions as I go. Yes, it’s been over a month now that I’ve been living out of a suitcase. Mad-dog woman has yet to vacate the villa in Spain. It’s making me resilient but possibly a bit homesick.

This little terrace is great though. I’m sat with old men who are chatting amongst themselves. Their skins are all sun-weathered and they are all smoking the dregs of roll-ups. They’ve been puffing on the same butt for twenty minutes at least.

From across the road, I can hear a woman singing. The houses here are stunning, painted in beautiful pastel shades or artistically tiled. And I suspect this isn’t even a posh area. They all have ornate iron balconies and some sport flower baskets. Is this the famed Fado that the woman sings? It sounds sad enough; as if she mourns for a lost lover from her past. The men stamp their smokes out and clap as is customary when she finishes.

Tonight I head to the first Eurovision semi-final. Current betting suggests we might all be heading to Cyprus next year. Every now and then, a fan of the contest, draped in the flag of their country walks by. It feels odd – two strong cultures clashing and not entirely meeting. I’m sure that the city of Lisbon welcomes the extra fame and tourism that the contest will bring. Fans of Eurovision could do well to take a minute to sit and watch the world go by.

Last Friday night, I nipped along to the fab Leicester venue, The Cookie, to review a gig. I was hoping that this review would get featured in the Leicester Mercury (as per my review of Drenge the following night).. For some reason, I can’t see that it’s been published.. Never mind – I’ll feature it here….

The last time that I saw Lisbon in Leicester, a crisis had just beset the band. They’d had guitars and instruments stolen in Birmingham and so needed to beg and borrow temporary equipment to play. I was struck by how decent and calm this young band appeared in the midst of disaster. 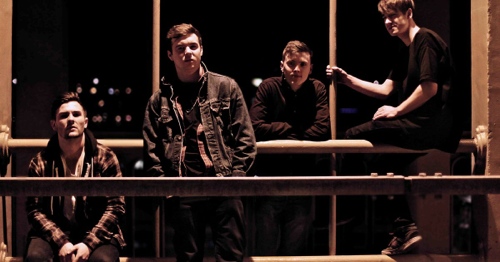 Fortunately, on Friday night at the Cookie, no such predicament was in play. Lisbon had a full kit through which they could inflict their funky radio-friendly indie swagger on a half full but wholly appreciative audience. “It’s Friday night, let’s go crazy yeah?” urged lead singer, Matthew Varty, with genuine, Geordie exuberance. “Keep your dancing going”, he maintained as the band launched into new single, ‘Vice’. Varty worked the crowd hard and, as a result, we bopped to their beat.

“This is a song that’s very close to our hearts. It’s about the town we were born in; a place very far from here.” announced Varty by way of introduction to one of Lisbon’s minor hits, ‘Native’. These young lads are clearly not in a rush to forget their Whitley Bay roots even though headline tours and radio airplay are inevitably pushing them away from home comforts.

Despite still having youth on their side, Lisbon must feel like senior citizens in contrast to their support act on this tour, Declan McKenna. No more than 17 years old, it’s Declan who, arguably, the crowd had flocked to see. Winning the Glastonbury emerging talent competition last year thrust this young man into the limelight. It’s fair to say that he’s still honing his live craft.

Almost apologetically, Declan introduced songs that “you probably don’t know”. Assisted by an equally young band (two boys and two girls), this is awkward, angular, art pop. The plonk from the Korgs and the Casio mesh with the strum from the sticker-covered, beaten and bruised guitar to give us a very 2016 version of new wave post punk. Stand-out tracks, ‘Paracetamol’ and ‘Brazil’ lead the way as Declan slyly and shyly engages with those gathered to watch. It’s possibly heaping a bit too much praise to say that this Declan Mc reminds me of the early years of another Declan Mc (Elvis Costello) but they certainly walk in similar water.

Opening the night was the local Ali Clinton Band. This powerhouse,blues-rock trio, led by the sickeningly brilliant guitar playing of Ali, appeared, on the surface at least, to have little in common with either Lisbon or Declan McKenna. But, tonight has all been about precocious (in a positive sense), young talent. The three acts on this bill can all be filed in that particular cabinet.

The rain is pouring and the leaves are falling. It’s a trudge through the congealed sludge of Autumn’s detritus as I make my way to Leicester O2’s Academy to see Eliza And The Bear. “We’ve never been to Leicester before“, announces lead singer, James Kellegher, towards the end of that set and you find yourself wishing that they’d seen it on a warmer, sunnier day.

For Eliza And The Bear’s singalong, sunny, festival-friendly brand of rocky pop is best perhaps imagined when accompanied with a cider in hands and the heat beating down. The largely female audience here, at this O2 bar that’s attached to Leicester University, are doing their best to relive their post-A-level states of bliss by mouthing along to the words from the songs they recognise. The marching, uplifting beat elicits raised, clapping hands from the Freshers. Fan girls at the barrier exchange glances with each other when they sense that guitar player, Martin Dukelow, has flopped his excess of blonde hair in their direction.

It’s difficult not to get caught up in this sweetness. There is an undeniable charm and happiness about the proficient pop that Eliza And The Bear produce. “I’ve got friends. I’ve got family here“, sings James in Friends, the set opener. It’s this inclusive tone they establish that remains throughout. They want you to be their mates, because they are all mates together. They’re more than happy to chat with you at the merch stall after the gig. They sympathise with support band, Lisbon, who have had much of their gear stolen the previous night in Birmingham. Bands often seem to get their kit nicked in Brum.

I only managed to catch the last three numbers from Lisbon but any unfamiliarity with their instruments doesn’t show. On the evidence of tonight they come from that same sunny factory as Eliza And The Bear. There are backing tracks adding to the layers here but nobody in the appreciative audience seems to mind that. A general tick in the box from this direction and I’ll mark them down as ones to watch in full when I next get the opportunity.

Eliza And The Bear do not seem to be lacking in equipment. This is a show in which their guitar tech is kept pretty busy with Fenders being replaced by Gibsons. Towards the end of the set, Martin is handed an acoustic guitar and the rest of the band, apart from James, leave the stage. It’s the obligatory chilled-out moment and a chance for this duo to show off their vocal and musical talents. The girls at the front don’t need sunshine to melt at this point.

“We’ve spent a year now writing our debut album and in two weeks time, once this tour is done, we’re going to head into the studio to record it,” offers James during the set. On the evidence of tonight, a spring release should set Eliza And The Bear up nicely for some sunny, Summer days.

Eliza And The Bear were previously interviewed by Sonic Breakfast. You can read that interview here.